BUSINESS China's restructuring can offset impact of trade war with US

China's restructuring can offset impact of trade war with US 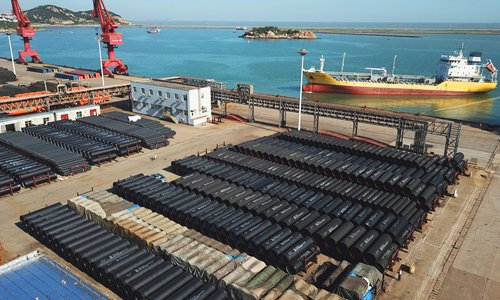 A container ship is seen at the Port of Lianyungang in East China's Jiangsu Province on September 8. (Photo: VCG)

The ongoing economic reform including tax cuts, which has been resolutely carried out, will help China ease the impact of the trade war with the US, shore up market confidence and ensure sound, stable GDP growth, Chinese experts said on Sunday.The comment came after a Reuters report on Sunday cited a senior US official as saying that US President Donald Trump is likely to slap new tariffs on an additional $200 billion worth of Chinese imports as early as Monday, which will drastically escalate the trade war between the world's two largest economies.Xi Junyang, a finance professor at the Shanghai University of Finance and Economics, said that bilateral trade tensions will increase downward pressure on the domestic economy in the coming months.Newly released data for August showed that major indicators for economic growth, employment, inflation and exports were relatively steady, although some figures including investment, a key indicator of future activity, were weaker than expected.According to data released by the National Bureau of Statistics on Friday, China's fixed-asset investment growth fell to 5.3 percent from January to August, 0.2 percentage points slower than the number from January to July, indicating a further slowing momentum of the domestic economy."The downward pressure, which was originally caused by macro-deleveraging efforts and investors' cautious attitude toward investment activities, is expected to continue for some time," Dong Dengxin, director of the Finance and Securities Institute at the Wuhan University of Science and Technology, told the Global Times on Sunday. Dong noted that "only after squeezing bubbles in 'artificially high' economic growth first, could China find the most sound and stable growth model for its future development." "China has to overcome some challenges in the economic reconstructing process," Dong said.Xi agreed, saying that "The negative impact from the China-US trade war, which will be long-lasting, can be fully absorbed if China could continue its economic reforms despite the downward pressure. "To cope with the downward pressure coming from both domestic and external factors, the government should phase in a more proactive fiscal policy, which includes business tax cuts to ease enterprises' economic burdens," Xi told the Global Times on Sunday."Detailed plans on tax reductions are under discussion," according to a report from National Business Daily on Sunday, citing Yang Weimin, the former deputy head of the Office of the Central Commission for Financial and Economic Affairs. "Efforts to streamline some government bodies that rely on government subsidies or tax revenues could be further promoted," Dong said, adding that the government has been fully aware of this, as shown by the way it has merged major government bodies since last year."There is still scope to build more infrastructure projects, and that is an effective tool to drive up the economy, but large-scale infrastructure investment is unlikely to be used by the government anymore," Dong said.Growth in infrastructure spending slowed to 4.2 percent in the first eight months of the year, compared with a 5.7 percent rise for the January-July period.Dong noted that some effects of China's reforms have already emerged despite slowing economic growth, and innovation efforts by domestic enterprises have strengthened. For example, the services industry is becoming increasingly a new growth driver.Justin Lin Yifu, a professor of economics at the National School of Development in Peking University, said at a forum on Sunday that China's growth potential remains huge, since the country has great scope for innovation. In the next 20 years, China still has the potential to grow at an annual rate of 8 percent, he said.