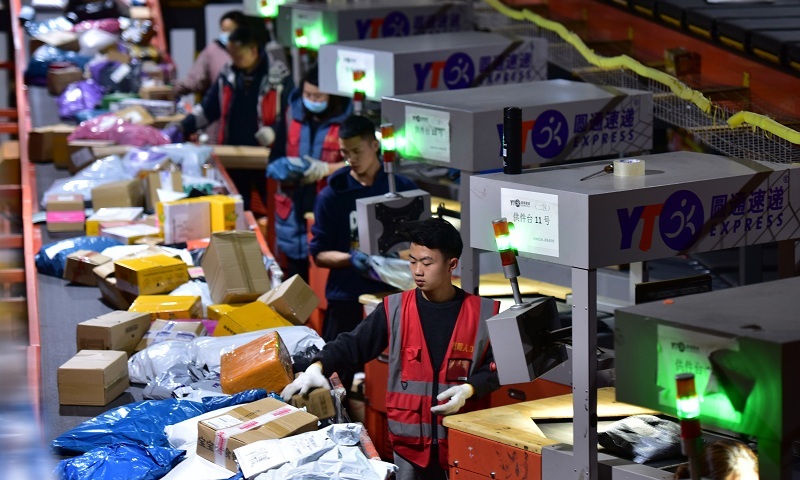 As this year's 618 mid-year shopping carnival nears the end, Chinese people's purchasing power is once again in focus. With early signs of robust purchases over the course of the first buying spree in the post-COVID-19 era, industry insiders and market observers expect China's rapid rebound in the consumer sector and its e-commerce prowess to underpin regional and global economic recovery.

Meanwhile, the country's regulatory toughening for the platform economy that targets unfair and monopolistic market practices - such as coercing merchants to pick one of two platforms to limit consumer choices - helped beef up consumer confidence and ensure sustained growth, they noted.

Major domestic e-commerce platforms including JD and Alibaba's Tmall kicked off the mid-year shopping campaign on June 1 with record sales. Unlike previous years, this year's extravaganza began pre-sales from May 24, and is scheduled to conclude on June 20.

While the complete sales tally remains unavailable, there are already signs of robust shopping.

On the first day, JD saw its sales from its online supermarket JD Super surge more than seven times from the prior year, with many brands reporting better-than-expected sales, according to JD data.

The spending of Tmall's premium "88VIP" members also got off to a strong start for this year's 618, with a jump of 221 percent year-on-year, per Tmall data.

A total of 250,000 brands on Tmall were expected to participate in the event, 2.5 times more than last year.

According to Shanghai-based Dada Nexus, which operates on-demand retail platform JD-Daojia, the platform recorded a rise of over 140 percent in gross sales year-on-year on June 1.

Cross-border e-commerce businesses in China are also enjoying the convenient logistics and favorable policies in the Southeast Asian region.

Miao Yujie, co-founder of Hangzhou-based apparel start-up Jollybuyer - which sells clothes to Thailand and Malaysia, said the number of orders doubled on June 6 compared with the same time last year. The date is a shopping promotion festival of online shopping in Thailand, according to Miao.

"The popularity of Chinese goods in overseas markets is improving gradually. Electronics, home appliances and clothes are very popular due to China's mature manufacturing industry and price advantage," Miao told the Global Times on Thursday, adding that China's e-commerce businesses have accelerated the |regional economic recovery in the post-COVID era as well.

Miao pointed out that consumption power in some Southeast Asian countries has weakened compared with last year. "For instance, in Thailand, which heavily relies on tourism to sustain its economy, per capita income is decreasing," Miao said.

Compared with last year's mid-year shopping campaign that was shrouded in the haze of COVID-19, among other uncertainties that prompted many export-oriented businesses to shift their focus into the domestic market, this year's event is anticipated to retrace its pre-virus levels, Zhang Yi, CEO of consulting agency iiMedia Research, told the Global Times on Thursday.

This year's event would feature more rationality, Zhang said, expecting an all-round boom in livestreaming last year that saw a galaxy of hosts making a fortune to shift toward a focus on top-tier influencers this year.

Moreover, with tougher regulations in place that clamp down on unfair competition, both vendors and consumers are convinced of a more regulated framework, contributing to more rational buying, observers said.

In the first five months of the year, online sales of physical goods across the country jumped 19.9 percent from the year before, official data showed. The reading averaged 15.6 percent over the past two years.

Online sales of food items soared 30.5 percent over the first five months on average on a two-year basis, while that for clothing hit 9.3 percent - both quickening from the numbers for the first four months.

The mid-year campaign is also shown to be a boost for brick-and-mortal sales.

JD.com launched a plan for the 618 spree that enables the involvement of a multitude of physical stores, having led to over 500 million visits to such outlets, according to the online retailer.

Also worth noting is that Chinese consumers have shown an unprecedented affection toward local brands along with an emerging "China chic" trend, amid the nation's push for technological self-dependence.

The overall transactions of local sports brands skyrocketed four times year-on-year on JD on the first day of the 618 event.