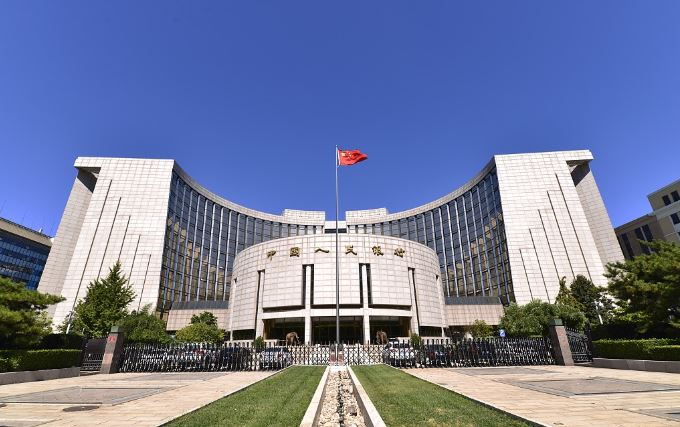 Headquarters of the People's Bank of China (PBOC), the central bank, is pictured in Beijing, September 28, 2018. (Photo: VCG)

BEIJING, Oct. 16 (Xinhua) -- China's central bank has lowered the level of cash that lenders must hold as reserves for the fourth time this year in its latest effort to support stable credit growth and shore up the economy.

Effective Monday, the reserve requirement ratio (RRR) was reduced by 1 percentage point, according to the People's Bank of China (PBOC).

Part of the liquidity unleashed, worth around 450 billion yuan (around 65 billion U.S. dollars), was used to pay back the medium-term lending facility maturing Monday, while the other 750 billion yuan would be pumped into the market, the PBOC said in a statement.

Compared with previous cuts in January, April, and June, Monday's move is bigger in terms of the amount of money unleashed for lenders, said Zou Hengchao with China Merchants Securities.

The primary goal is to step up capital support for the real economy and stabilize economic growth and market expectations, analysts said.

It also came as part of a government campaign to ease financing strains for cash-starved small- and medium-sized enterprises (SMEs) which have been affected by a domestic clean-up in the financial sector and escalated trade friction.

"The RRR cut has provided cheaper and stable long-term funding for banks, and we think it could help stabilize broad credit growth," said a research note from Morgan Stanley.

The investment bank's chief China economist Robin Xing said the total social financing (TSF) has shown signs of stabilization, the growth of new loans have picked up the pace, and bill financing has returned to the positive territory. "Better lending to SMEs could support export-oriented enterprises."

The cost of funds is retreating. The overnight Shanghai Interbank Offered Rate, which measures the cost at which banks lend to one another, fell 0.4 basis points to 2.373 percent Tuesday, significantly down from five-day, 10-day, and 20-day averages.

Analysts agreed that the funds directed into the economy will not boost the property sector, which usually rallies on such pro-growth policies, as home purchase restrictions still bite, and the impact on the Chinese yuan, which is under a weakening trend, will also be limited.

China has reduced the RRR for banks by 2.5 percentage points year to date, and further moves are on the cards, which, however, does not mean a shift in China's stance on its monetary policy.

PBOC governor Yi Gang on Sunday said the monetary policy maintained prudent and neutral, neither too loose nor too tight, at the G30 International Banking Seminar 2018, responding to concerns that credit supply is being eased.

The broad money supply growth was well-matched by nominal GDP growth, and the TSF expanded at an around-10-percent reasonable pace, Yi said, adding that the country still has plenty of policy tools.

China's policymakers have carried out a raft of measures to ensure the economy could hold steady against increasing global uncertainties, while also striving for progress in areas including industrial restructuring and financial deleveraging.

The economy has shown strong resilience with steady factory activity and robust consumption.

Morgan Stanley's Xing said the investment bank maintained its forecast on China's GDP growth in 2018 at 6.6 percent, highlighting the role of consumption in sustaining growth despite downward pressures.