Rural economy gets boost from e-commerce

Internet penetration is increasing in rural China, which is home to a large proportion of the population but is still struggling to shrug off poverty and backwardness. 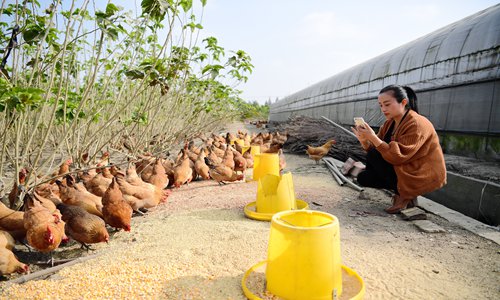 An employee of an e-commerce platform takes a photo of chickens that will be sold online in Jiehe village, East China's Jiangsu Province. (Photo: VCG)

Now, the internet is not only changing the living habits of many rural residents but is also giving them new ways to earn money in addition to traditional but less lucrative options like farming.

The trend also comes as the Chinese government is seeking new areas of economic momentum, with the country facing increasing pressure amid the Sino-US trade tension.

A rural resident surnamed Jin, who runs a small shop selling daily necessity products in Zhuji, East China's Zhejiang Province, said that the internet has become a vital part of her life and the lives of her neighbors.

"Now at my shop, mobile payment is commonly used by the younger generation. E-commerce is also standard. Almost every family in my village uses the internet for shopping, and in my family we receive packages from express delivery companies almost on a daily basis," she told the Global Times on Tuesday.

She also said the internet has opened up new business opportunities for the village people.

"I know several people in my village who have opened family plants and sell specialty products like nutcrackers on the internet. I hear that their business is quite good," she said.

Liu Dingding, a Beijing-based internet analyst, who has visited many villages in recent years, also said that the internet has brought profits to rural areas of China.

"Unlike urban regions, which have different types of industries, in rural China e-commerce is often the only way for people to get richer, particularly in really impoverished areas," Liu said, adding that he had been to some very underprivileged homes, like cave houses, that had unobstructed 4G network signals.

Liu also mentioned a county named Linxian in North China's Shanxi Province, which has made money by selling dates on the internet, and he said there are many other similar examples.

Major e-commerce websites like JD.com and Taobao have launched campaigns to push e-commerce business in rural areas. The "Rural Taobao" campaign launched by Alibaba, for instance, has prompted many rural residents to sell farming products and other goods on the internet.

Online retail sales reached 1.24 trillion yuan ($182 billion) in 2017, up by 39.1 percent on a yearly basis, according to an e-commerce report published by the Ministry of Commerce in May.

Ma Wenfeng, a senior analyst at Beijing Orient Agribusiness Consultancy, said that the internet has changed China's rural landscape to a great extent.

"Normally, the intermediate links among rural sales of products are very complicated, which has driven up commodity prices. But now with the help of the internet, such costs have been significantly reduced. This has increased the profit potential for rural sellers," he told the Global Times on Tuesday.

But he said that for the internet to play a bigger role in the rural economy, the government should set up a credit system, like clarifying product information, seller information and buyer information to make business more transparent and standardized.