With the development of newly emerging technologies like 5G, big data and the Internet of Things (IoT), the traditional server industry will encounter disruptions while providing opportunities for domestic server makers and cloud computing providers, industry analysts said. 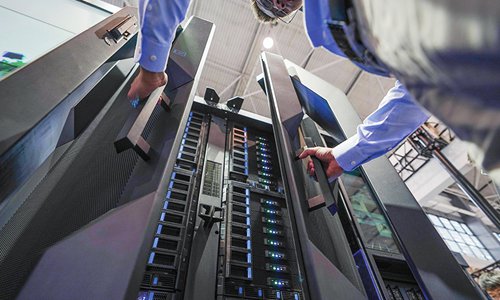 The market share in the server sector held by Chinese producers has been increasing partly because more companies are opting to buy ordinary servers from Chinese original design manufacturers (ODMs) with lower prices, instead of high-level ones from the US with Intel cores, according to the Chinese edition of the Nikkei Asian Review.

Data from International Data Corp (IDC) showed that in the first quarter of this year, Dell Technologies retained the No.1 position in the global server market with a share of 20.2 percent, followed by HPE/New H3C Group, with a 17.8 percent share. China's largest server maker Inspur held 6.2 percent of the market, ranking third spot, while Lenovo had 5.7 percent in the fourth.

"As a key part of IT infrastructure, servers play a basic supporting role for computing, and we want to realize independence and self-control especially in these basic technologies," Liu Xin, a senior industry analyst at Beijing-based CCID Consulting, told the Global Times.

Chinese vendors are catching up in terms of global share while their US counterparts have shown declining trend, although the latter still lead the market, said Liu.

According to market research firm Gartner, Dell's shipments of x86-based servers declined by 6.8 percent year-on-year in the first quarter of this year, while No.2 vendor HPE's shipments fell 14.5 percent. In comparison, Inspur's shipments grew 10.6 percent.

Liu acknowledged that there are still some areas where Chinese vendors need to catch up to the core technologies in the server sector such as CPUs, semiconductors, storage and operating system.

"But we can also see alluring opportunities," Liu added.

As more enterprises are choosing open cloud computing solutions instead of traditional server providers amid the new technology wave featured by 5G, big data, artificial intelligence and the IoT, Chinese server vendors that cater to such rising demand will find late-mover advantages.

"The prioritization of emerging technologies worldwide has been and will be giving these vendors strategic opportunities for business growth, changing the market share in the meantime," Dai said.

IHS Markit analyst Vlad Galabov said in a January report that "Inspur is sending a clear challenge to established server veterans HPE and Dell," adding that it is making big investments in AI, cloud service providers and a diverse portfolio.

"With 5G commercialization landing in China, it will play a catalyst role for domestic players to make trials in the huge market," Liu noted.