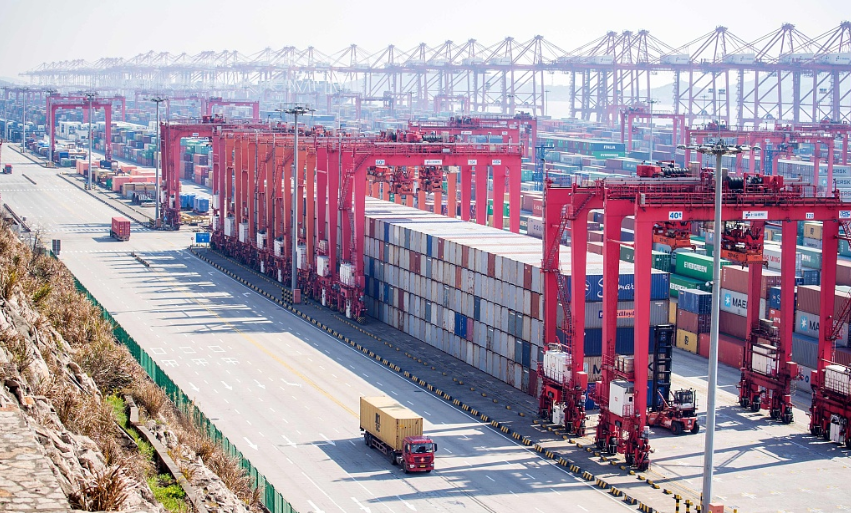 Containers are organized in stacks at the Yangshan Deep Water Port, part of the Shanghai Pilot Free Trade Zone in Shanghai. (Photo: VCG)

The high-quality development of the Chinese economy, as well as the country's ongoing reform and opening-up, has continued to attract foreign investment in the first half of the year, People's Daily reported.

The Shanghai Municipal Government issued on May 6 certificates of regional headquarters and R&D centers to 27 overseas companies, including Apple, Honeywell and Nike, indicating more multinationals are expanding their businesses in China. Investment guru Warren Buffett also said his company Berkshire Hathaway would add more investment to China at a shareholder meeting early this month in the US.

Statistics from the Beijing Municipal Commerce Bureau showed that, in the first quarter, the capital attracted 45 foreign enterprises ranging from information transfers to software and information technology services, up 50 percent year-on-year, with actual use of foreign capital reaching $1.29 billion, up 3.1 times on a yearly basis.

According to statistics from the Ministry of Commerce, China set up 13,039 new foreign-funded enterprises through April this year, and the actual use of foreign capital reached $45.14 billion, up 6.4 percent year-on-year.

High-tech manufacturing and the service industry stand out as highlights in foreign investment in the first four months, with the actual use of foreign capital of the former reaching 33.4 billion yuan ($4.83 billion), up 12.3 percent, and that of the latter up 73.4 percent to 52.5 billion yuan during the same period.

Countries involved in the Belt and Road Initiative established 1,050 new enterprises in China in the first four months, a growth of 23.5 percent, and the trade volume between China and these economies exceeded $6 trillion in the past six years.