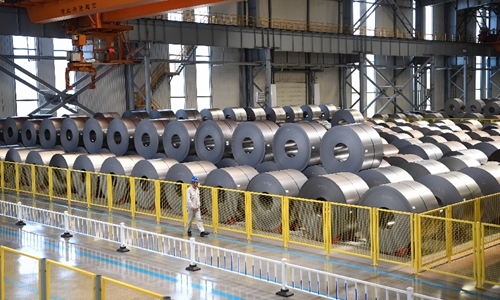 CISA official He Wenbo said the quarter-on-quarter growth would be remarkable, citing favorable demand-side plans, including the renovation projects of old urban residential areas and enhanced investment into "new infrastructure."

China will intensify the renovation of old urban residential areas in 2020, with 39,000 communities to be renovated and benefiting around 7 million households.

The majority of steelmakers tracked by the CISA had resumed production amid broader reopening in the Chinese economy, with 178 out of 191 enterprises back on track as of April 19.

To keep the steel industry stable, CISA called for firms in the sector to organize their production on demand, enhance communication and strengthen cooperation in the industrial chain.

Efforts should be made to deepen supply-side structural reform and further crack down on illegal expansion activities of production capacity, the association said while emphasizing green development and intelligent manufacturing in tandem with the latest policies on new infrastructure.

Due to the COVID-19 pandemic, China's consumption of steel plummeted as economic activities declined in the first quarter, and the sluggish demand both at home and abroad battered price and fueled an inventory surge.

The China Steel Price Index hit 96.86 as of the second week of April, the lowest level since May 2017. Inventories of key steel companies hit 17.95 million tonnes in early April, rising 88.32 percent from the start of the year.