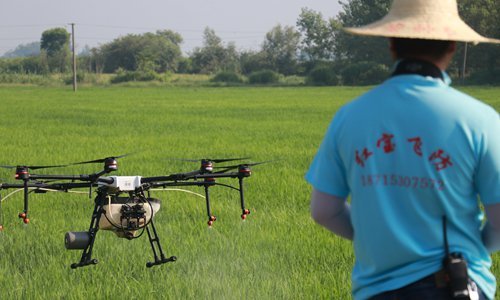 China's summer grain output hit another record high this year, the Ministry of Agriculture and Rural Affairs said on Wednesday.

The record-breaking bumper summer grain harvest was revealed by Minister of Agriculture and Rural Affairs Tang Renjian during an inspection tour in Sanhe, North China's Hebei Province, according to a statement on the ministry's website. He didn't disclose the exact amount of harvest.

Previously, a record was set last year despite the COVID-19 pandemic, with summer grain output totaling 142.81 million tons, up 0.9 percent from the year before, according to data from the National Bureau of Statistics (NBS).

Last year's tally was attributed to an increase of 1.6 percent in the average yield per hectare, although the total area for growing summer crops dipped 0.7 percent year-on-year to 26.17 million hectares, according to the NBS.

Summer grain is the first shot fired for grain production in 2021, with a victory scored after weathering a spring cold spell, farm pests and diseases, among other challenges, laying the groundwork for the full-year grain output to remain above 65 million kilograms and offering support for economic and social development, Tang said, describing the victory as a hefty harvest to embrace the Communist Party of China's 100th anniversary.

The bumper summer grain harvest this year was partly owing to supportive policies from the central government, reversing a decline in the area used to grow summer wheat for the fourth consecutive year into an increase of more than 3 million mu (200,000 hectares),the statement read.