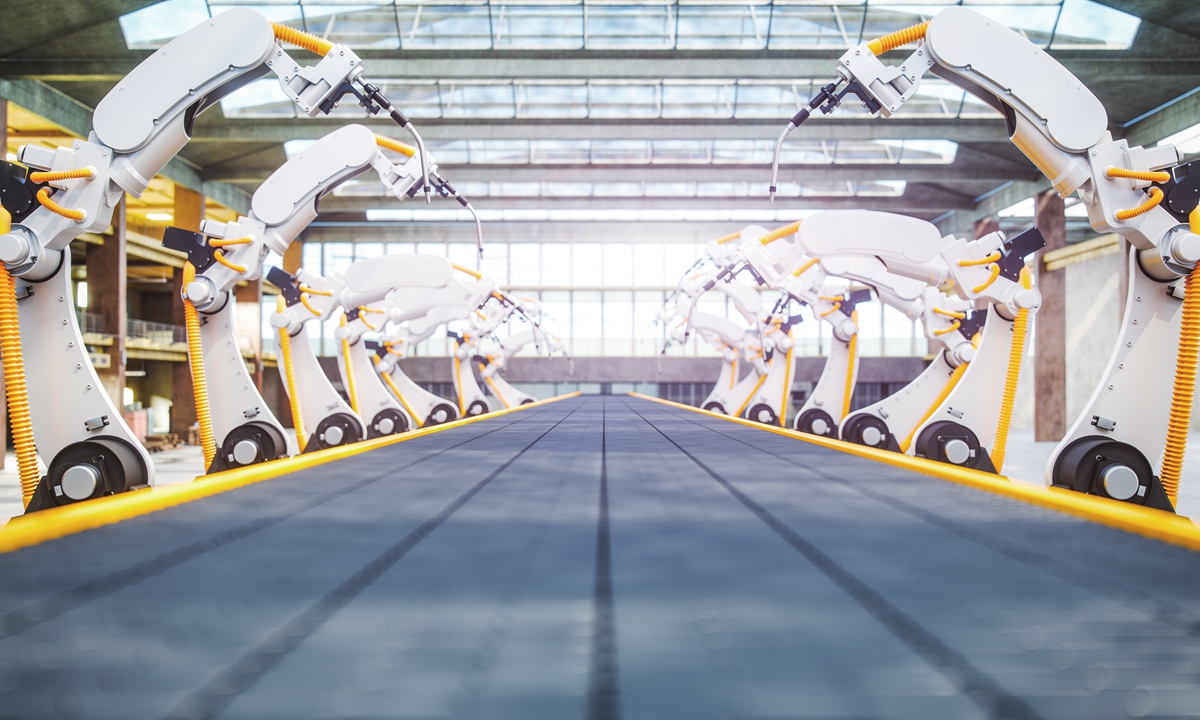 Chinese tech firms are rushing to showcase their cutting-edge robotics technologies ahead of the World Robot Conference (WRC) 2022 that will kick off in Beijing on Thursday. Industry insiders and scholars have claimed that China's advantages of a complete hardware industry chain, advance development in areas such as big data and artificial intelligence (AI) as well as large quantities of capital will narrow down the gap with developed countries like Japan over coming years.

Measuring 177cm in height and 52kg by weight, the robot supports up to 21 degrees of freedom in motion and achieves a real-time response speed of 0.5m/s for each degree of freedom, allowing it to fully simulate human movements, according to Xiaomi.

It's worth noting that the robot's artificial intelligence (AI) mechanical capabilities are all self-developed by Xiaomi Robotics Lab, demonstrating the technological advancement of China's robotics industry.

Tesla has scheduled its AI Day to September 30, when it's expected to debut its Optimus humanoid robot prototype.

In the meantime, Tencent unveiled the second generation of Max on August 8, its home-grown multimode quadruped robotic dog. The robot can identify complex terrain in real time and create maps of any surface, thanks to such advanced technologies as terrain recognition and robot visual positioning, according to a press release on the company's WeChat account.

China's robotics industry has witnessed a boom in development in recent years, and has been the world's largest consumer of industrial robots for eight consecutive years. The country's industrial robot output reached 366,000 units in 2021, up 67.9 percent year-on-year, while the country's robot density reached 246 per 10,000 employees in 2020, nearly doubling that of global average, according to data from the Ministry of Industry and Information Technology.

China's robotics sector has formed a complete industrial chain, ranging from components to complete machines to integrated applications, Wang Peng, an assistant professor at the Gaoling School of Artificial Intelligence at Renmin University of China, told the Global Times on Monday.

However, there is still gap between China and advanced countries, Wang said. "Some technologies in the industry such as core chips and large-scale integrated circuit still face strangle from developed countries, while we haven't completely controlled key algorithms," he said, noting that foreign enterprises also set international standards in the smart manufacturing and automation sector.

In December, the National Development and Reform Commission, along with 14 other government agencies, released the 14th Five-Year Plan for the Robotics Industry, aiming to make China a global center of excellence for robotics technology innovation, advanced manufacturing and integrated applications by 2025.

The plan envisages an average annual growth rate in revenues from the industry in excess of 20 percent, urging stakeholders to focus effort on R&D and applications for industrial robots, services robots and special robots.

With increasing attention being paid to the robotics industry, large quantities of capital are flowing into the sector. The domestic robotics industry witnessed at least 86 fund-raising events in the first half of the year, with disclosed capital totaling between 5 billion yuan ($736 million) and 7 billion yuan, according to media reports.

On July 22, the Shanghai-based collaborative robot manufacturer JAKA Robotics announced that it has successfully completed Series D financing of around 1 billion yuan, led by investors including Temasek, TrueLight Capital, and SoftBank Vision Fund 2.

Domestic artificial intelligence firm Beijing OrionStar Technology Co that launched disinfection robots amid COVID-19 resurgences told the Global Times that China has advantages in talent with a broad talent pool, with the internet industry nurturing a large cohort of world-class engineers, product managers and digital technologists, which also contributed to the country's advantage in aspects such as big data and AI. 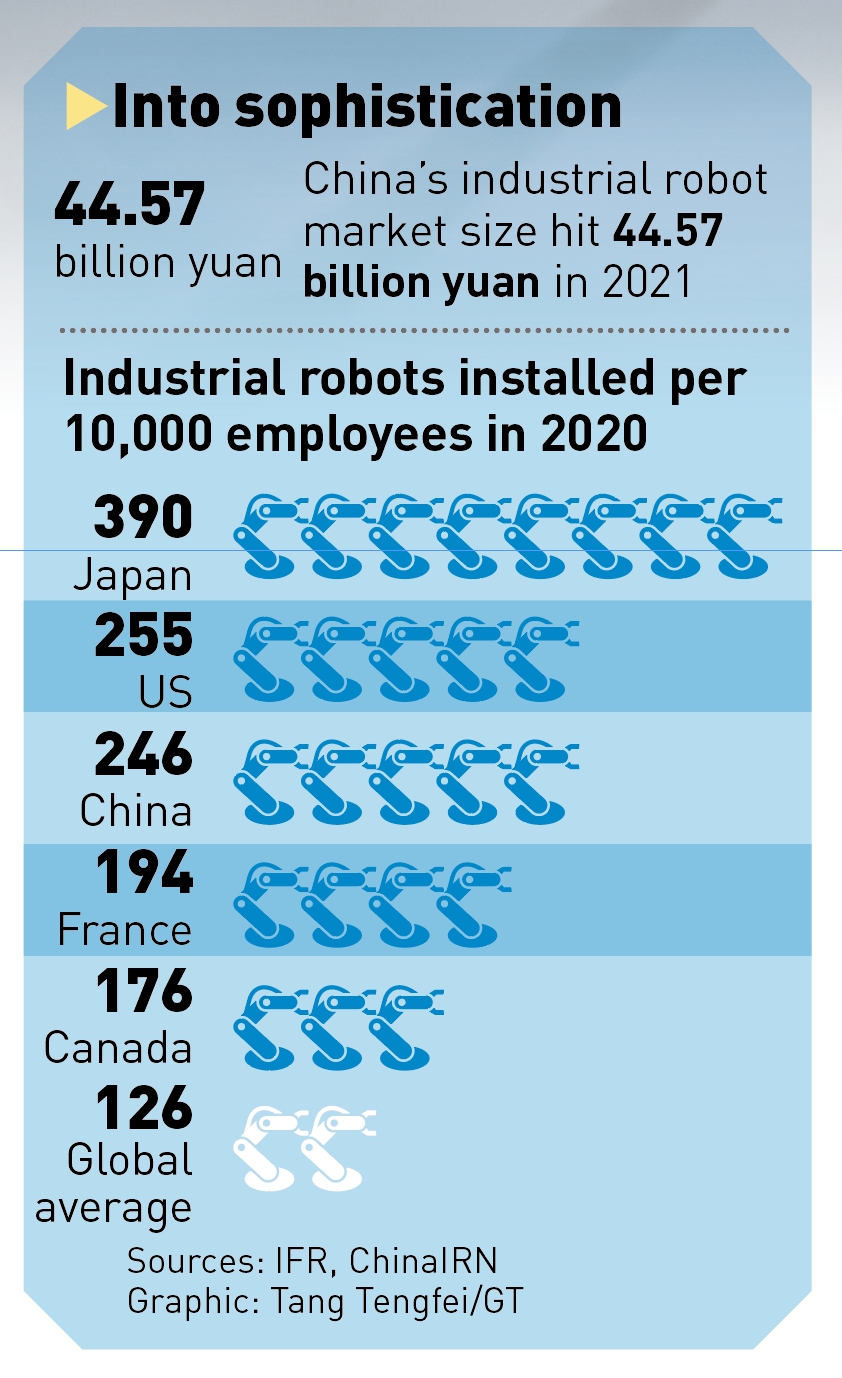 Against the backdrop of the comparatively slower development of algorithms across the world, the application of big data and AI will spark greater potential of Chinese robotics companies, according to OrionStar.

Amid the rise of local brands, Japan - a global leader in robotics - is facing new competition in the Chinese market, and Japan-made robots are no longer mainstream in China, Chen Yan, head of Japanese Enterprise (China) Research Institute, said in an article on domestic news outlet guancha.cn.

"Due to the catching up of countries and regions like China, Japan's share in global robot markets will continue to drop," Chen said, noting that Japan's industrial policy is to blame.

Japan passed its Economic Security Bill in May in a move that is widely regarded as being aimed at China, its main goals include blocking cooperation with major countries such as China in advanced technologies. "While it seems that the law could provide protection for Japan's robotics industry, Japan's small domestic market is insufficient for the country to be a giant in the sector," Chen said, noting that Japan's robotics industry will eventually wane following its semiconductor and battery industries.