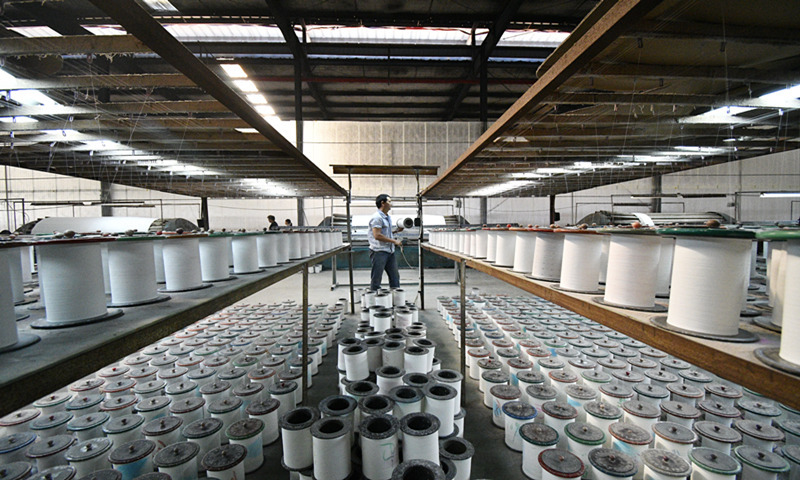 China's better-than-expected economic recovery dispelled the concerns that most countries had in the first half year. Moving into the post-coronavirus era, China may be the only major economy to see growth this year, according to IMF's latest outlook.

What has partly supported this unbelievable success is the resilience shown by countless Chinese enterprises, with some having survived, even thrived, following the hard-won battle against COVID-19. Among them, textile enterprises are on the rise.

According to several spinning mills and textile traders Global Times reporters have reached out to, new orders at domestic textile enterprises are growing with increasing imports of cotton and returning orders from India and other countries in Southeast Asia.

As the Double Eleven shopping spree (November 11) in China, Christmas and winter are all fast approaching, Chinese textile makers and businesses throughout the supply chain have been enjoying the turnaround seen in recent months.

Statistics provided to the Global Times by e-commerce giant Alibaba show that the overseas sales of clothing products was the strongest performer compared with the first half of the year, jumping from eighth to fourth in a list of highest selling product categories. In September, the amount of clothing traded on the Alibaba international trade site soared by 274 percent year-on-year, with the number of buyers surging by 266 percent.

Keqiao has the largest professional textile market in Asia, China Textile City, where around 25 percent of the world's global shell fabric is traded annually.

Per a report from local news site Zhejiang News, China Textile City recorded a turnover of 90.5 billion yuan in the first three quarters, up 10.39 percent year-on-year despite the impacts of the pandemic.

Some manufacturing orders that had previously been transferred to Southeast Asian countries are returning, Tan Ke, head of Keqiao District Commerce Bureau, told the Global Times.

Many local textile manufacturers have seen orders surging recently, Tan said, adding that the orders halted in the first half of the year are now resuming, with some producers lining up orders for production through November.

Rising orders boosted demand for raw materials, such as cotton.

Zhou Shuiping, a manager of a fabrics processing company Shaoxing Baishan Textile, told the Global Times on Saturday that the price of cotton is increasing because winter is coming, which leads to an increasing demand for seasonal fabrics, such as down jackets, cotton suits, as well as some Christmas items such as fabric plush toys.

"Some raw materials factories have raised their prices twice. The average price of fabric has increased by about 10 percent. Though seemingly a small jump, it is still a significant growth given the large quantity of goods to be delivered," Zhou noted.

The rising prices have also caused longer waiting times for shipments. Normally Zhou receives his goods in three days, but now it is taking a week due to booming overseas orders.

"We have recently increased our import of cotton from overseas due to mounting orders," a marketing representative of a spinning mill based in East China's Shandong Province told the Global Times.

Another spinning mill based in Wuxi, East China's Jiangsu Province, has also displayed this positive trend. Both companies are increasing imports of cotton from abroad. India, Brazil and the US are among those on the supplier lists of these spinning mills.

Data from the Chinese customs authority shows China imported 140,000 tons of cotton in August, surging 54 percent year-on-year due to the continuous production recovery and consumption of textile goods.

What has kept the spinning mills busy is the trend of returning orders from countries like India.

For example, Henan Xinye Textile, a fabric processing company, said that due to the pandemic, some textile orders have been transferred from India to China, according to media reports.

A Chinese commerce official called this a normal market move. "Multinationals adjust production on a global scale, and international buyers select suppliers based on production capacity, which are all normal market decisions," said Li Xingqian, director of the Foreign Trade Department of China's Ministry of Commerce.

Textile traders, who have a keen understanding of the market, linked the move to the turbulent epidemic situations in some countries.

Sara Wang, a merchandising manager of a Shandong-based foreign trade corporation focusing on textile goods, told the Global Times that the outlook of overseas markets has been further darkened by a second wave of the virus.

Textile manufacturing in Southeast Asian countries did not stop until September, and with China now resembling a much more stable environment for production and businesses amidst the ongoing crisis around the world, orders are being transferred back home, Wang noted.

"Fortunately, the recovery of the domestic market has beat expectations with roaring demand," Wang said, stressing that overseas markets may remain weak for a period of time, with Chinese traders and producers forced to reflect on their marketing strategies, particularly with a second wave of infections abroad.

"Nearly 90 percent of Chinese companies will have to adjust their marketing behaviors and rely more on the exploration of the domestic market," Wang said.