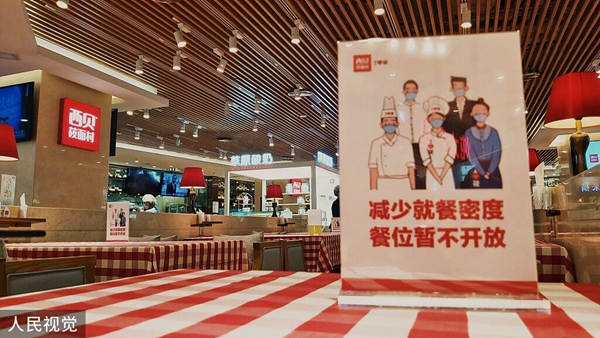 A photo taken on March 13, 2020 shows a reopenned Xibei noodle restaurant outlet in Jinan, Shandong province. Signs on each table warn against too many diners on each table. (Photo: VCG)

The widely popular restaurant chains Haidilao and Xibei, who found themselves in controversy after hiking prices amid the COVID-19 pandemic, have apologized and restored their original prices.

Haidilao issued an apology, stating that "the decision to raise prices was an error by the company's executives" and had "harmed the interest of our customers."

China Securities Co. estimates that COVID-19 will result in a 5.04 billion-yuan ($716 million) loss for Haidilao. After reopening some outlets on March 12, the chain had raised prices but soon met backlash online. Following customer complaints, a representative of Haidilao initially told the media that the price hike would be limited to within 6% of pre-epidemic prices.

However, after the apology on Friday, the hotpot chain announced that they would retract the decision to raise prices.

Meanwhile, Jia Guolong, chairman and founder of Xibei, directed all of his restaurants to restore their original prices. Jia also issued an apology: "yes we did hike our prices, and yes I did receive your criticism. It's not the right time to raise prices."

But Jia still stressed that the company continues to struggle and that he hoped customers could come back to support his business.

He previously estimated the monthly losses around the Spring Festival would be around 700 million to 800 million yuan. Jia stated that: "if the situation continues, our company's cash flow will only be able to support the company for three months."

China's catering industry has suffered heavy losses due to the shutdown of nearly all restaurants during the epidemic. According to statistics from China's National Bureau of Statistics on March 16, catering sales plunged by 43.1% during the first two months of the year.

However, some have defended the decision to raise prices, including in an editorial published by the Southern Metropolis Daily. "The saying 'no price hike during the epidemic' is not applicable to the catering industry and lacks basic common sense. It is an unreasonable moral kidnapping to threaten businesses against price hikes in this way, and threatening those that do to apologize is even more outrageous."

An editorial in the Guang Ming Daily further reiterated the point: "Perhaps under the influence of public scrutiny, some top catering companies, in consideration of the brand's images, will seek to survive a wave of public relations crisis by apologizing and giving out discounts. However, the number of catering enterprises with such strength is still few after all. Many small and medium-sized enterprises, with weak pressure resistance, cannot adjust the balance of their costs and benefits through market behavior. It is not a simple public relations crisis, but a survival crisis."