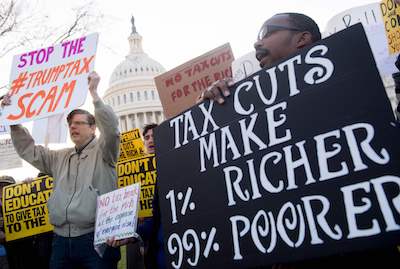 Demonstrators against the Republican tax reform bill hold a protest rally outside the US Capitol on Capitol Hill in Washington, DC, Nov 30, 2017. (Photo: VCG)

China’s VAT reform will offset the spillover effects of tax cuts approved by the US Congress, according to a Chinese scholar.

The US Senate approved its version of the tax reform bill on Saturday, which would slash the corporate tax rate from 35 percent to 20 percent.

China’s comprehensive launch of replacing business taxes with the value-added tax (VAT) has reduced more than 1 trillion RMB in taxes from May 2016 to September 2017.

Zhang Lianqi, a member of the CPPCC and an accounting expert, said the long-term multiplier effect brought by the VAT reform should not be underestimated, which would incorporate tertiary industries into the VAT deduction chain. He stressed it is conducive for an upgrade in the economic structure.

Meantime, the VAT reform in foreign trade helps level up China’s export-oriented economic development and promotes China’s participation in the international division of labor and cooperation, he added.

Since indirect taxes are the main part of China’s taxation system, we need to make an advanced plan. Further related reform needs to be propelled, with the VAT the biggest tax type in the country.

Adjustments could be made on reduction and combination of the tax rate given multiple tax brackets after the VAT reform on tax reduction. While equality on tax burden in regard to individual tax needs further promotion.

National Academy of Economic Strategy of CASS researcher Yang Zhiyong said the US tax reform deserves the world’s attention. China needs to keep a close watch on the progress of the reform and deal with it actively.

Analysts say that such a sweeping tax overhaul will boost US economic growth and domestic consumption and promote repatriation of capital inflow. On the other hand, it might widen the income gap and increase financial risks.