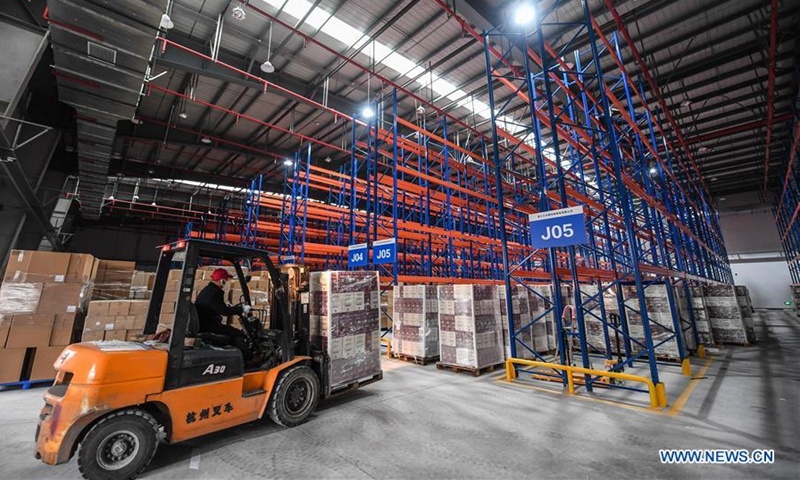 For Christmas product sellers in Yiwu, the world's largest wholesale market for Christmas ornaments in East China's Zhejiang Province, the business winter they experienced last year because of the coronavirus outbreak has passed, but the spring has not yet come, as new problems like rising raw material costs and labor shortages emerge in 2021, preventing a full-fledged recovery.

In 2020, Yiwu's Christmas products sales more than halved compared with previous levels, as the global pandemic slashed overseas demand. This year, however, orders started to rebound, and Yiwu's overall Christmas product orders surged by 30 percent on a yearly basis, said Cai Qinliang, secretary-general of the Industry Association of Christmas Supplies in Yiwu who also runs a Christmas product factory.

"Last year, many overseas purchasers didn't dare to place orders because of the coronavirus, and their inventory was mostly empty by the end of the year, so they placed more orders this year," Cai told the Global Times on Monday.

A Christmas product seller surnamed Tang also said that his shop's orders have surged by about 15-20 percent in 2021 compared with last year.

"Many of our products have already sold out this year, and snowman ornaments for Christmas trees are the most popular," he told the Global Times, adding that most products are exported to Europe and the US.

An official at Chinese customs in Cixi, a city near Yiwu, told China Central Television recently that Christmas product exports started to edge up in May, and the export volume rose nearly 5 percentage points in the second quarter compared with the same period last year.

However, the merchants stressed that business has not entirely recovered to pre-coronavirus levels, as new problems are emerging this year.

"The recovery could have been better, but the actual situation is worse than we expected it to be," Cai said.

He mentioned the problem of rising material costs, which have brought negative impact on not only profits, but also on factories' ability to fill orders.

"In particular, the price of steel has risen by a significant range, which has had some impact on the production costs of Christmas trees. But of course the impact is changing, along with the price changes," Cai said.

Rising material costs also made many factories reluctant to stock up on materials in February and March. As material prices move toward stabilization, they're now starting to scramble for those materials, which caused production delays at many factories.

"This year, the delivery times for Yiwu's Christmas products have been postponed in general, and although orders have risen 30 percent, the actual amount of orders signed only increased by 10-20 percent, because many factories couldn't deliver the products in time," Cai said.

Tang also said that his factory no longer accepts orders, because current orders have already taken up all the production capacity.

"Now my factory works seven days a week in shifts to make sure products can be delivered as fast as possible," he said.

Another headache that Tang is facing is that shipping containers are extremely hard to book, and it takes about one to two weeks to get shipping space. "Besides, the shipping rate from China to North America has surged to more than $20,000 for each standard container. This, plus high labor costs, have kept production costs at a relatively high level for us," Tang said.

Moreover, a more uncertain yet far-reaching risk for Chinese exports, including those of such daily necessities as Christmas ornaments and other products, is the strained economic relationship between China and the US, as well as tariffs that were imposed by the Trump administration and remain unchanged in the Biden era.

"For merchants, policy certainty is the most important thing, but the current ambiguous and passive attitude adopted by the Biden administration toward China is making businessmen in both countries afraid of making investments into China-US business," Lin Jiang, a professor of economics at Lingnan University College of Sun Yat-sen University, told the Global Times on Monday.

Lin said that the Biden administration wants to find alternative import sources besides China, but this is very unwise as no other country has the same level of supply chains as China does.

"Where else can the US find a market that has such good financing systems, ports and logistics systems like China? Therefore, it is certain that US importers, and eventually US consumers, will pay a higher price if they don't import from China," he said.