Yiwu, a trading hub in East China's Zhejiang Province, has sent 10,842 twenty-foot equivalent unit (TEUs) of goods such as daily necessities, textiles, auto parts, equipment and small home appliance in the first four months to 42 European countries and regions, including Spain, Germany and Belgium, via the China-Europe freight train. 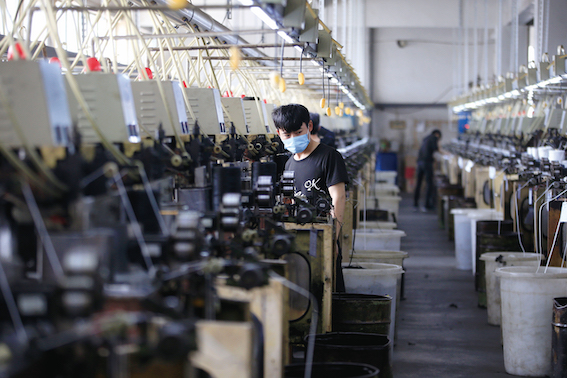 A worker is busy with producing and packaging zippers at a zipper manufacturer in Yiwu, East China's Zhejiang Province, the country's manufacturing hub. Almost all of the company's more than 200 employees have resumed work amid the novel coronavirus (COVID-19) pandemic. Photo: Yang Hui/GT

The number of TEUs sent from Yiwu via the freight train grew 45.88 percent year-on-year from January to April, according to data released by Yiwu authorities.

The steep rise comes as the capacity of air freight and sea shipments dwindled significantly worldwide due to stringent epidemic prevention measures.

In the first four months, the value of imports and exports via the train totaled 4.5 billion yuan, data showed.The operation of China-Europe freight trains from Yiwu has played an important role in shipping much-needed medical products and daily necessities made in China's Yangtze River Delta to European countries, according to Yiwu officials.

On February 10, the first day the China-Europe freight train resumed operations in Yiwu, it sent auto parts made by Chinese firm Geely to Minsk, the capital of Belarus.

So far, a total of 12 international routes from Yiwu have been opened, with one freight train each week. Most of the China-Europe trains departing from Yiwu reached Alashankou, a border city in Northwest China's Xinjiang Uyghur Autonomous Region. They then headed for Europe from the inland port.