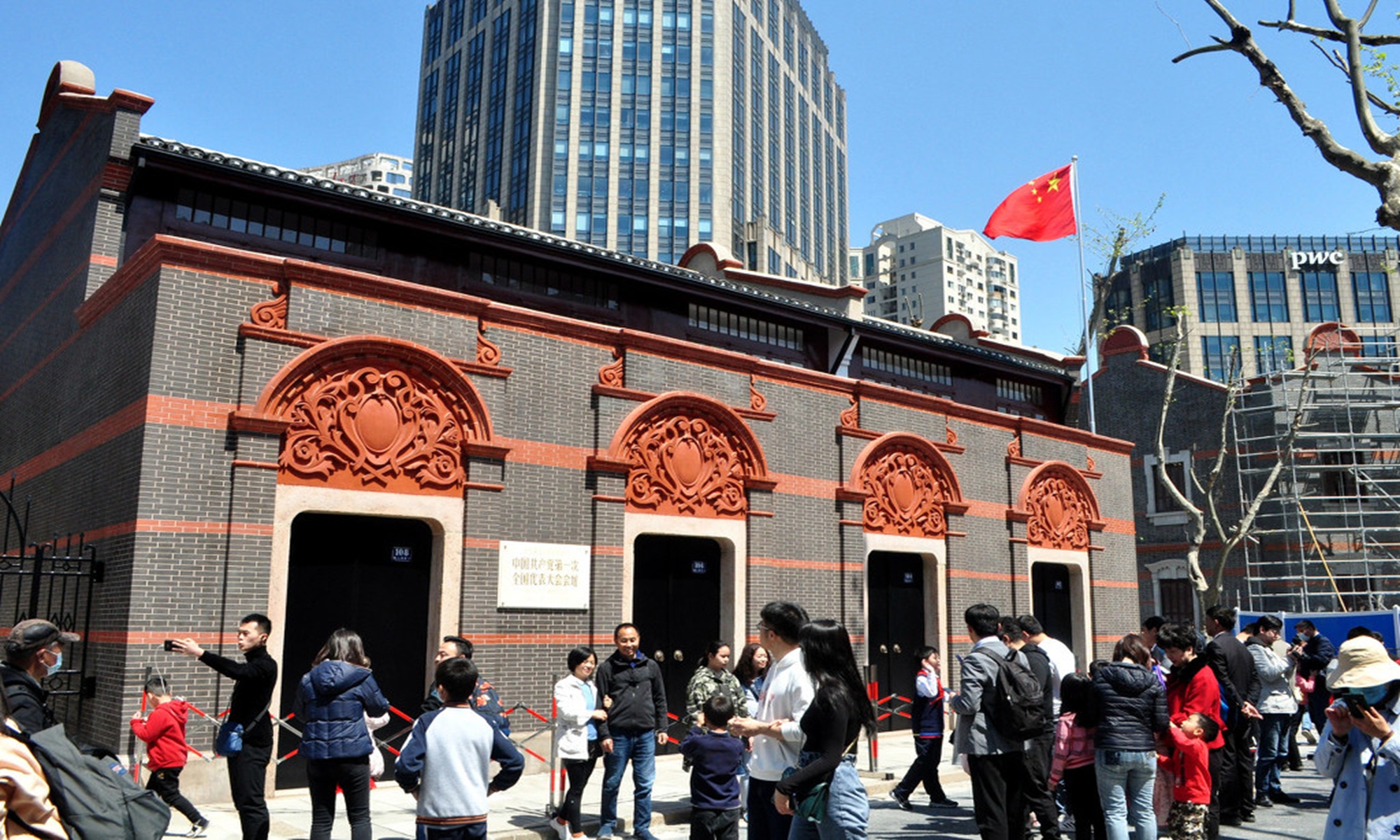 Tourists take photos in front of the site of the first National Congress of the Communist Party of China on the last day of the Qingming Festival holiday in Shanghai on Monday. Photo: IC

From the Palace Museum to Yellow Crane Tower, from Sanxingdui Museum to Potala Palace, all the travel sites in China are anxiously waiting for their show time, as Chinese people across the nation are about to enjoy a five-day holidays after two years of travel restrictions.
Lifted by a confluence of factors--from a robust economic recovery to epidemic prevention and control measures--China will hug the "hottest" May Day holidays. An agency predicted there are about 200 million people, equal to the combined population of UK, France and Germany, to make the trips and such travel peak will give another boost to the second-largest economy's consumption power.
In Beijing, tickets for the Palace Museum have been sold out until May 4, the second last day of the holidays, and even some complained that they have been snapping up tickets for three consecutive nights before getting one.
In Huanghe Lou (Yellow Crane Tower), in Wuhan, Central China's Hubei Province, 10,000 tickets have been sold and reservations will likely climb. The number of tourists is expected to double that of 2020, reaching 80 percent of that in 2019, a staff surnamed Zhang told the Global Times on Saturday.
Sanxingdui Museum, a favored travel destination following new discoveries at Sanxingdui ruins in Southwest China's Sichuan Province, set a cap on daily visitors from Sunday in order to prepare for the tourism flow.
Potala Palace, Southwest China's Tibet Autonomous Region, will start selling tickets a day ahead, and 3,000 tickets will be available per day.
Although the travel numbers still lag behind that of 2019 in Xinjiang, Miao Hairong, in Urumqi, Northwest China's Xinjiang Uygur Autonomous Region from Spring Tour, said the bookings are "hot," especially for self-driven tours, and many prefer the service of drone follow-up shooting.
Data from Trip.com Group showed that during the May Day holidays this year, the number of flight bookings has surpassed the level of 2019, an increase of 23 percent, and the number of trips are expected to exceed 2019 and reach a new high of 200 million.
'Red tourism'
"Red tourism" is expected to receive a further boost and become a featured tourism category as the Communist Party of China prepares to celebrate its 100th anniversary in July.
A staff with the memorial hall for the Zunyi Conference site in Southwest China's Guizhou Province told the Global Times that they are ready to receive a large crowd by then as people's desire to learn and experience revolutionary history and culture has grown.
Zunyi is about 100 kilometers away from Maotai town, home of the famed liquor, Moutai, which is also a must-see for travelers.
"Now we receive 200 teams every day, nearly double the number in 2019," Nie Cai, a guide of the memorial hall, told the Global Times on Saturday, adding that the visitors include young people, some of who come to learn about the history of the Party, as well as veterans who come to commemorate their revolutionary age.
Such confidence is also shared in other memorial sites. Staff members from the Nanhu Lake Revolutionary Memorial Boat, in Jiaxing, East China's Zhejiang Province, and from Nanchang August 1 Memorial Hall in Nanchang, East China's Jiangxi Province confirmed to the Global Times that the number of tourists has increased a lot compared to the same period last year and more tourists are expected.
In 1921, the first National Congress of the Communist Party of China was concluded on a red boat on Nanhu Lake in Jiaxing.
According to the Ministry of Culture and Tourism, from 2004 to 2019, number of red tourism trips made each year increased from 140 million to 1.41 billion.
Booming consumption
Xu Xiaolei, marketing manager at China's CYTS Tours Holding Company, predicted that tourism during the May Day holidays will be more popular than Qingming, the previous three-day holidays, and he even predicted that the revenue from tourism will be equal to 2019, which grabbed 117.67 billion yuan ($18.12 billion).
Civil aviation transportation in China is the first to benefit, as domestic demand remains on an upward trend, given the roaring volume and prices of tickets. Market watchers also predict that the worst days for the civil aviation industry may have passed.
The holidays also bring surging bookings for hotels, catering and cinema, and Chinese experts said that consumption during the holidays will extend the previous profits.
In the first quarter of the year, catering revenue increased by 75.8 percent year-on-year, recovering to 98 percent of the same period in 2019. Box office revenue is close to the level of the whole year of 2020, returning to about 97 percent in the same period of 2019.
Consumption during the May Day holidays will at least reach and even exceed the level of 2019, Cong Yi, a professor at the Tianjin University of Finance and Economics, told the Global Times on Saturday.
"Last year Chinese economy has achieved positive growth. However, the consumption of culture and tourism was severely restrained by the pandemic. There should be a compensatory need for consumption this year," Cong said.
The pattern for the May Day consumption shows the trend for consumption upgrading, which indicates a continued stable and robust economic outlook in the Chinese economy, he added.