QINGDAO, June 24 (Xinhua) -- Containers pile up below automated cranes in the container terminal of the Port of Qingdao, east China's Shandong Province, where self-driving container haulers have replaced old-school trucks. 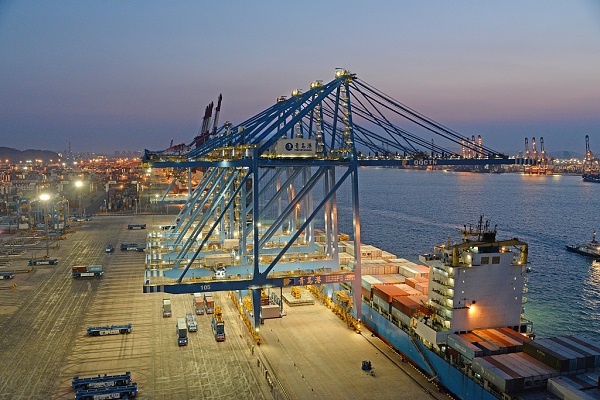 In China, technologies such as big data, AI and 5G are making the likes of the Port of Qingdao increasingly automated, thus boosting the container business of the country.

Blockchain technology can also help. "Based on blockchain, it becomes possible to obtain real-time information of the entire shipping process, thus improving the shipping efficiency," Yin Lin, deputy director of the China Transport Telecommunication and Information Center under the Ministry of Transport, told China's Smart Port Conference 2019, which concluded in Qingdao Friday.

Five port clusters have taken shape in the Bohai Bay area, the Yangtze River Delta, the Pearl River Delta and the southeast and southwest coastal regions.

In 2018, the container throughput of China's major ports reached about 250 million standard containers, or twenty-foot equivalent units (TEUs), up 5.3 percent from 2017, according to the Ministry of Transport.

Besides, seven out of the world's 10 largest ports in terms of annual cargo and container throughput last year were in China.

"With the top ports, such as Shanghai and Qingdao, getting more automated, the automation of China's ports is gaining momentum," said Yin.

Port automation is extending beyond the eastern seaports to the inland ports. The Port of Tangshan in north China's Hebei Province plans to promote automation by adopting technologies such as mathematical modeling and big data.

Automation can also improve safety. Facilities including a weather monitoring system and automatic fire extinguishing system have provided greater safety assurance for container terminals, according to Port of Qingdao.

"Automation will bring profound changes to the operation and management of ports and create an efficient, safe, smart, open and inclusive port ecosystem in the future," said Chen.