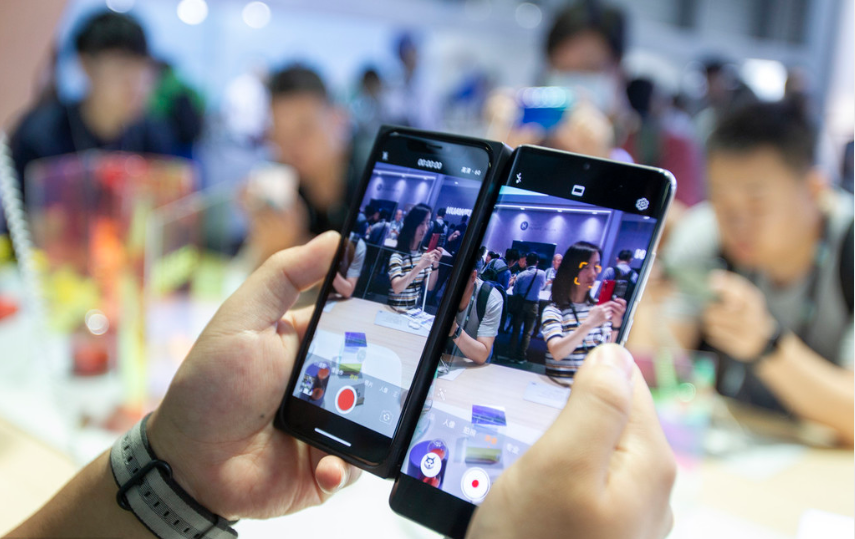 A visitor compares different smartphone models at an exhibition in Shanghai on June 11, 2019. (Photo: IC)

China's mobile phone market extended its upswing in shipments over the past month, increasing 1.2 percent year-on-year to 38.29 million units and adding to the 4.8 percent growth rate from April, according to data from the China Academy of Information and Communications Technology released on Tuesday.

The output of 4G-enabled cellphones was 36.48 million units in the same period, a rise of 1.2 percent from a year earlier. These models comprised 95.3 percent of all mobile phone shipments in the country, compared with 1.82 million 2G phones and no 3G phones, per a report released by CAICT, a research institute under the Ministry of Industry and Information Technology.

In the first five months of 2019, the total shipment of mobile phones in the domestic market was 152 million units, representing a 4.8 percent dip year-on-year. Of these 145 million or 95.3 percent were 4G-enabled phones — a decrease of 4 percent — while volume for 2G and 3G phones was 7.06 million and 57,000 units, respectively.

Forty-one new models were issued in May, with 34 enabled for 4G networks and seven for 2G, according to the report, a decline of 33.9 percent from the year before. The number of new models launched from January to May was 208, declining 35.6 percent from the same period in 2018.

Domestic brands took the lion's share of the mobile phone market, accounting for 91.3 percent of total shipments in May. Their output reached 34.96 million units and 2.7 percent growth, and their number of new models unveiled last month was 37, down 32.7 percent on a yearly basis while still contributing 90.2 percent to the total.

On smartphones, shipments amounted to 36.44 million units in May, equivalent to 95.1 percent of total output and up 1.3 percent yearly. Notably, 90.5 percent of smartphones were those with Android operating systems.