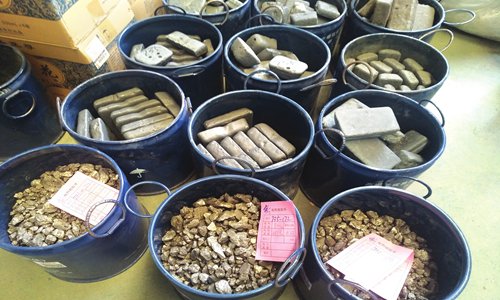 Tougher environmental protection efforts have reduced the supply of rare-earth minerals in Ganzhou, a key rare-earth base in East China's Jiangxi Province, where the industry has become more regulated and market-oriented. But as supplies dwindle and prices rise, some affected downstream rare-earth enterprises have urged the central government to prioritize domestic demand over exports, including to the US, to accelerate the development of high-end applications. They believe that high-end products will be a more powerful counter weapon than raw metals in the China-US trade war."Now, illegal mining of rare earths, which has few environmental controls, has almost disappeared in Ganzhou amid the local government's crackdown partly driven by environmental enforcement," a manager of a large local rare-earth producer told the Global Times on Thursday on condition of anonymity. The rare-earth industrial scale in Ganzhou accounts for one-third of China's total, according to a document released by the National Development and Reform Commission, China's top economic planner. The city is also home to 80 percent of the nation's heavy rare earths. In Ganzhou, only several state-owned heavy rare-earth miners with certification, which have passed environmental standard tests, are still in operation, he said, describing the local government's environmental endeavor in helping the industry move to an "orderly and regulated manner.""In the past, illegal mining has squeezed the profitability of China's rare-earth industry, with most manufacturers scrambling for survival. Cheap prices also offered a shortcut to the US' technology and military rise… But now, prices reflect the supply-demand situation and we, as a beneficiary, can begin to make a profit," the manager said.Local regulators are also keeping an eye on another heavily polluted industry chain in the rare-earth sector: extraction. Li Jing, a vice president of state-owned Ganzhou Rare Earth Youli Science and Technology Development, which has a rare-earth extraction business, told the Global Times on Thursday that local environmental authorities have installed cameras and "monitoring bars" that can measure mineral containment near sewage drain outlets of rare-earth companies."The data is updated in real time and if the containment exceeds the designated amount, the local regulator will be informed," he said.Getting greener Under the government's environmental push, many companies in Ganzhou are investing in recycling to reduce pollution during the extraction process.   In Youli's factory, waste water is being extracted and separated from rare earths, according to Li. The company spent about 5 million yuan ($724,000) to buy equipment to treat the waste water.  Yu Xi, general manager of Ganzhou Fortune Electronic Co which makes rare-earth permanent magnets and other items, told the Global Times that the company is working with universities in Beijing and Jiangxi Province to refine technologies to extract rare earths from waste water.Supply shortages mean higher prices for rare-earth oxides. Li noted that the price of praseodymium neodymium oxide has jumped to 320,000 yuan a ton on Thursday from about 200,000 yuan a ton in late April.While upstream suppliers are thrilled by the price surge, some downstream manufacturers said that they feel pressured and hope that the local government can take measures to protect the demand of the domestic industry.China is the world's largest exporter of rare earths. In 2018, the country exported 53,031.4 tons of rare earths with a value of 3.39 billion yuan, up 3.6 percent year-on-year.  "If you are still hungry, how can you take care of someone from the outside?" asked Li.Yu said that as heavy rare earths play an "indispensable and irreplaceable" role in the military, new energy and the technology sector, the Chinese government should "give some kind of protection" to its domestic users.For example, while imposing a quota on rare-earth exports to prioritize domestic demand, policymakers should also encourage high-end applications of rare earths, such as in maglev trains, new-energy vehicle parts, robots, drones and some smartphone parts. These are the most profitable and high value-added sectors across the industrial chain.   "We really need to speed up the application of rare earths" amid the China-US trade war, Yu said. "Restricting the exports of rare-earth applications, rather than the actual resources or metals, could be a more powerful 'killer card' in dealing with the dispute."