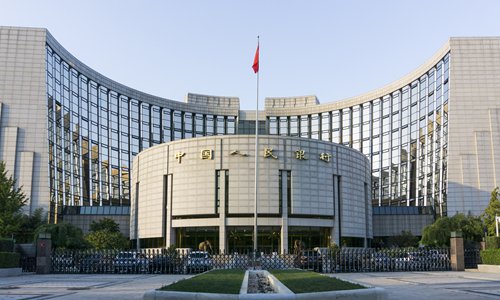 Headquarters of the People's Bank of China, China's central bank, in Beijing in October 2018. (Photo: IC)

China's stock rallied on Thursday following a high-level meeting which announced that the country will make timely cuts to overall and targeted required reserve ratios (RRRs) to boost liquidity so as to support the real economy amid downward pressure.

The benchmark Shanghai Composite Index rebounded 0.96 percent to close at 3,000 points and the smaller ChiNext market index rose 1.18 percent to 1,700 on Thursday.

An analyst said the statement shows that China is ramping up efforts to deal with the complicated external environment by using multiple policy tools to help reinvigorate the domestic economy.

During a televised conference on Thursday, Chinese Vice Premier Liu He stressed that the financial regulators should scale up counter-cyclical measures and ensure that the impact of monetary policy flows more quickly to enterprises.

According to a State Council meeting held on Wednesday, China will implement overall and targeted cuts in RRRs for banks in a prompt manner.

The upcoming RRR cuts, which are expected to be implemented in the middle of this month, will enhance banks' ability to lend and thus offer more support for major projects, said Lian Ping, chief economist of the Bank of Communications.

Other policies will be rolled out in line with increased liquidity, Lian told the Global Times on Thursday.

He forecast the People's Bank of China, the country's central bank, will reduce the rate on the medium-term lending facility (MLF) in the middle of September and the new loan prime rate (LPR), which is linked to the MLF, will also be lowered.

"Overall, we'll stick to a prudent monetary policy, but the trend is to become slightly looser as we step up counter-cyclical readjustment," said Lian.

China's RRR is in the middle of the range compared with other developing countries, meaning there is still space for further declines, said Lian.

The meeting also called for more issues of special local government bonds. New additional bond quotas for the next year could be released ahead of the original schedule.

The bonds will be mainly used to finance transport infrastructure projects, energy projects such as natural gas networks and storage facilities, and environmental protection and social security projects. The funds can't be used to build up land inventories or for real estate development, debt swaps or projects that can be commercially operated.

The meeting also stressed that further steps will be taken to ensure the stability of employment, the financial sector, foreign trade, foreign investment, domestic investment and public expectations.