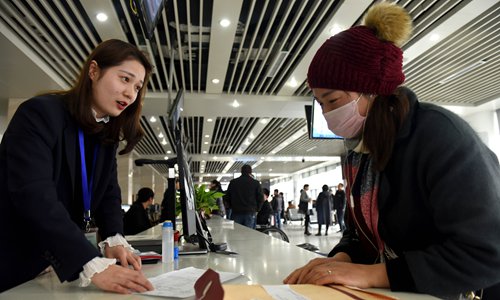 A variety of government charges and fees were cut effective on Monday as China sought to ease the downward pressure of its economic transition, which is being aggregated by the ongoing trade war with the US.  The cuts, which total 300 billion yuan ($43.86 billion), would benefit numerous individuals and companies in the country. The cuts were approved by the State Council, the cabinet, at a meeting in April.Lin Jiang, an economics professor at Lingnan College of Sun Yat-sen University, said that this round of cuts is part of a comprehensive policy package to reduce the living and business costs of Chinese people and companies. "In the past, China tilted its efforts toward tax cuts, but policies involving charges and fees have lagged behind. This has caused many government charges and service fees to remain at unreasonably high levels," Lin told the Global Times on Monday. Commenting on the 300 billion yuan worth of fee cuts, Lin said that such strength is "unprecedented." The government clarified specific areas where fees will be reduced. After the cuts, ownership registration fees for immovable property including garages and parking places will fall from 550 yuan each to 80 yuan each. The fees for ordinary passports are reduced from 160 yuan each to 120 yuan. The government also introduced changes for companies, such as cutting utility rates for general industrial and commercial businesses by 10 percent, cutting the average broadband service rates for small and medium-sized enterprises (SMEs) by 15 percent.It is also cutting the average mobile internet service rates for SMEs by more than 20 percent and cutting the registration fees for continued use of trademarks from 1,000 yuan to 500 yuan, accord to the plan.Easing pressure The fee cuts, following several rounds of tax cuts this year, come at a time when China's general economy is under pressure. "Domestic companies are facing a relatively harsh macroeconomic environment, and the China-US trade war has added to the pressure," Dong Dengxin, director of the Finance and Securities Institute at Wuhan University, told the Global Times on Monday. The Purchasing Managers' Index, an indicator of economic health for the manufacturing and service sectors, contracted in both May and June. Meanwhile, GDP grew 6.4 percent in the first quarter, compared with 6.8 percent a year earlier and 6.6 percent for all of 2018. To ease this pressure, the Chinese government enacted tax cuts as well as fee cuts to reduce operating costs for domestic companies and increase disposable personal incomes to support consumption, Lin said. "I predict that domestic GDP growth will continue to slide in the second quarter, but with the tax and fee cuts, third-quarter GDP growth should stabilize at the 6.4 percent level," Lin said. Local issues However, Lin cautioned that with the tax and fee cuts, local governments' revenue would shrink. To deal with this fiscal pressure, issues of local government bonds have been burgeoning.From January to May, local governments have issued 1.94 billion yuan in bonds, compared with 876.6 billion yuan in the first five months of 2018. "I believe that the central government has already appraised the risks of such large-scale tax and fee cuts and reached the conclusion that it's worth launching the cuts to lay a foundation for China's long-term economic development," Lin said.Dong said that China is unlikely to continue such large-scale fee and tax cuts in the second half of the year. "I think the government will continue to cut taxes and fees but not in a one-step manner," he said. Lin also stressed that the focus of the second half year's mission is to implement the cuts that have already been launched.