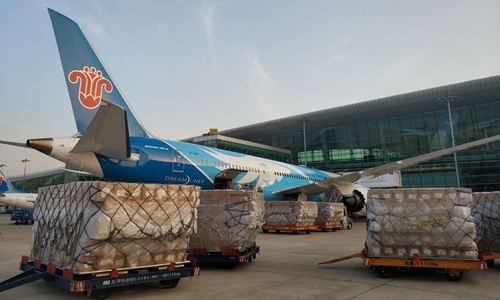 Tonnes of medical supplies are to be loaded onto a China Southern Airlines flight for New York at an airport in Wuhan, central China's Hubei Province, on April 24, 2020. (Provided to Xinhua)

China Southern Airlines, the largest air carrier in China in fleet size, said that from Tuesday it will stop taking passengers departing from 21 countries to China that transfer via a third country.

The countries include 10 in Africa including Ghana, Guinea and Ethiopia. There are also eight Asian countries on the list, including India, Bangladesh, Nepal and the Philippines. Russia and Brazil are also on the list.

The carrier cited virus control as the reason.

The announcement came after the Civil Aviation Administration of China (CAAC) announced it was suspending some flights from abroad.

The latter two airlines are required to suspend flying for four weeks from next week.

China Southern has frequently found itself on the flight suspension list in recent months. In October alone, there were five flight suspension orders released by CAAC, and only one time the carrier was not on the list, with the most affected routes being the ones flying from Paris through Dhaka to Guangzhou.

As COVID-19 cases rebound sharply in countries from North America to Europe, Chinese embassies in several countries, including Russia, the US and the UK, are now requiring Chinese and foreigner passengers flying to China to present a negative result for a serum IgM antibody test, in addition to the previously required negative test result for a nucleic acid test, if they are to be allowed to board a flight to China.

China's National Immigration Administration on Tuesday warned residents to continue to avoid cross-border travel at a time when many other countries are seeing coronavirus resurgence.