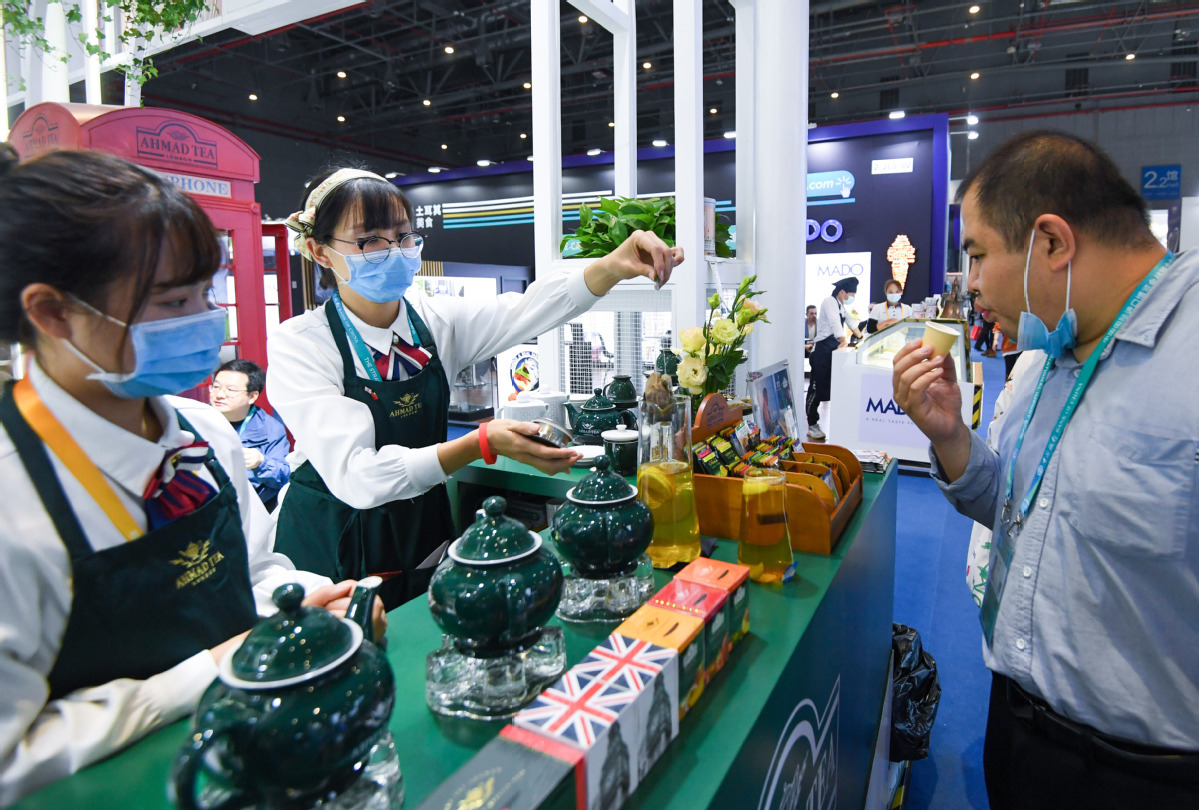 A visitor tries tea products from the UK during the recent third China International Import Expo in Shanghai. (Photo: XINHUA)

Despite the broad challenges of COVID-19, China's swift economic recovery has ensured that the country remains a key market for companies from the United Kingdom in 2021, the British Chamber of Commerce in China said on Tuesday.

About 82 percent of British companies have cited China's market potential as a reason to increase investment in the country next year. Most of these companies expect to expand their offices in the country by an average of 13 people next year, according to British Business in China: Sentiment Survey 2020-2021, conducted by the chamber between Oct 12 and Nov 9.

There are high expectations for China's economic prospects next year, said St John Moore, chair of the British Chamber of Commerce in China. The organization consists of Beijing, Shanghai, Guangdong and Southwest branches.

"At a time when the Chinese economy has emerged from the turmoil of the COVID-19 pandemic, it is absolutely vital to understand the opportunities and also the potential challenges facing British companies going into 2021," he said.

Drawing opinion from 256 British companies, the survey found many are cognizant of the benefits that a UK-China free trade agreement could bring, and encourage the British and Chinese governments to work toward this eventual goal.

In particular, companies report that the ability to transfer capital between the UK and China, the removal of tariffs on imports into each other's market, and the ease of obtaining business licenses and certificates would be the most valuable outcomes of a future FTA, according to the study.

The survey discovered that about 75 percent of companies from the IT and telecommunication sectors list China as their top priority. In the education sector, 80 percent of enterprises rank China among their top three priority markets. The country also remains a key market for British businesses from the healthcare, consumer goods and hospitality sectors.

Goods trade between China and the UK amounted to 575.67 billion yuan ($88.08 billion) between January and November this year, up 6.5 percent on a yearly basis, data from the General Administration of Customs showed.

Mark Edwards, general manager for China operations at Diageo Plc, a London-headquartered spirits producer covering a wide range of alcohol categories including Scotch whisky, gin and beer, said thanks to the Chinese government's efforts to prevent and control the epidemic, Diageo started to see business recovery in July and the business is almost on a par with last year's performance at present.

The company has also discovered new distribution channels in China, including the tourism resorts in popular destinations such as Hainan province, as domestic travel will continue to show more upward momentum given the country's dual-circulation development pattern.

Edwards said Diageo has seen growth opportunities in all cities in China. While the penetration rate of international spirits was fairly low in lower-tier cities five years ago, it has been increasing significantly in cities such as Xiamen and Quanzhou in Fujian province.

"E-commerce platforms in this case have played an important role to reach out to the consumers," he said, adding China is one of its high-priority markets. The firm will continue to invest and launch new products in the country.

"China has always been the nucleus of our global business map, and it will remain so, given that over 50 percent of the world's construction is taking place in China. The country is also the vanguard of high-density urban planning, setting the standards for other countries to follow," said Keith Griffiths, chairman and global design principal of Aedas, the British architectural design firm.

"We have been encouraged by China's evolving city policies that help engender people-friendly urban planning, Aedas will continue growing alongside China, and create more sustainable and integrated communities across the country," he said.