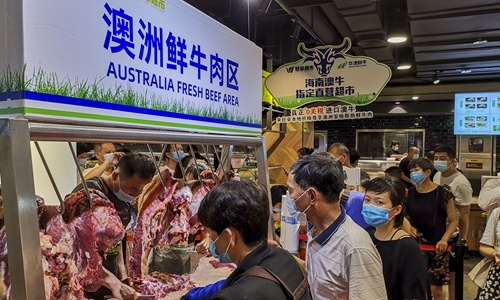 China has suspended the imports from Australian beef supplier Meramist Pty Ltd, the sixth supplier to face such a move in Australia this year.

Chinese authorities will temporarily suspend applications and registration for beef exports originating from the Meramist plant starting from Monday, according to a notice on the website of the General Administration of Customs

Meramist is the sixth Australian beef to be frozen out of the Chinese market temporarily this year.

On May 11, China suspended imports from four of Australia's large meat processors based on their violations of long-standing inspection and quarantine requirements.

In August, Chinese authorities suspended Queensland abattoir John Dee from selling meat to China due to traces of chloramphenicol found in their products.

In addition to the six suspended suppliers, a further Australian beef firm chose to halt its selling to China of its own accord in July.

According to Beef to China, an industry research firm, the number of suspended beef suppliers currently account for more than one-fifth of total number of Australian beef suppliers to China.

Amid the frayed bilateral relations, China's imports of Australian beef have seen a steep decline, from 14,000 tons in September to 11,932 tons in October, a drop of 14 percent, according to Beef to China.

Over the first 10 months this year amid the pandemic, the Chinese mainland imported 226,000 tons of Australian beef, a drop of 9.3 percent year-on-year, Beef to China added.

Chinese experts said anti-dumping measures were imposed in accordance with WTO regulations and were not part of any alleged "trade war" with Australia. They urged Canberra to grow up and reflect on its wrong deeds that damage bilateral ties, and make concrete moves for a better trade environment before it is too late.