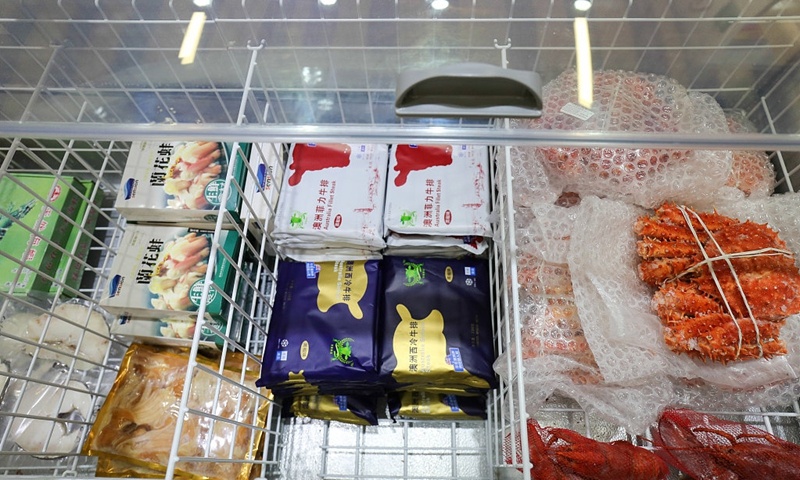 China took the emergency measure of suspending aquatic product imports from a Pakistani company, after the packaging of three of its products produced positive COVID-19 test results, China's customs said on Tuesday.

According to a statement from China's General Administration of Customs (GAC), all imports from the Pakistani firm M/Socean Gold Seafood will be suspended for a week, starting from Tuesday. However, imports will automatically resume after one week, the statement said.

Companies from several countries with heavy COVID-19 infection rates have had their sales to China suspended after positive test results from the products' packaging. The countries include Ecuador, Brazil and India.

With increasing positive cases being found in cold chain products from overseas, some experts in China have been calling for a circuit-breaker mechanism in China.

Zhang Boli, a key expert and consultant who was in Wuhan at the peak of the domestic epidemic, told the media about his suggestion of a circuit-breaker mechanism, Tianjin Daily reported Sunday.

China's customs require a negative test report and conduct sampling tests and sterilization for cold-chain imports, but not every item can be tested, Fan Xubing, president of Beijing Seabridge Marketing, a leading shrimp importer, told the Global Times Sunday.

For example, a 40-ton container can hold about 2,000 cold-food boxes. Some three to five boxes from each container may be picked for random inspection, Fan said, noting that the customs will expand the inspections if it detects the virus, but it is impossible to test all shipments.

"Although the source of the epidemic has not been determined, we need to be vigilant and on guard with imports of cold-chain goods. If this loophole is not closed, the same problem is likely to occur in other places," Zhang said.