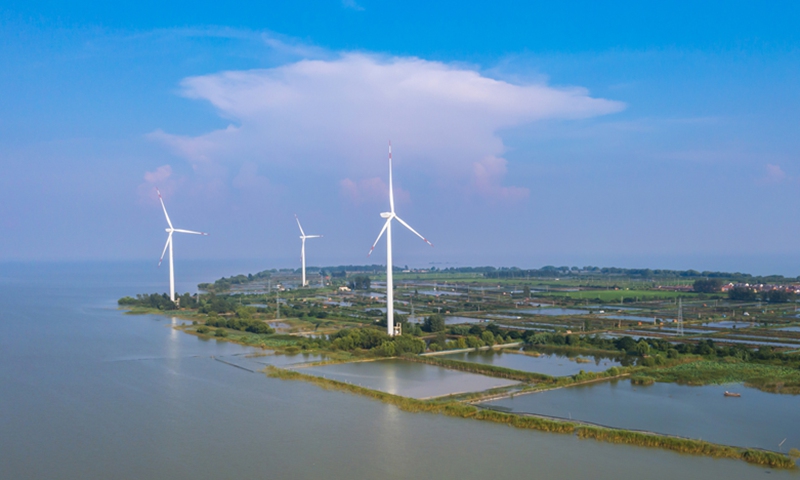 Windmills rotate alongside a lake in Longji town, East China's Jiangsu Province on Tuesday. The project, which has 38 turbines, has a capacity of 98.1 megawatts. It has generated 633 million kilowatt-hours of electricity over the past six years, reducing carbon dioxide emissions by 1 million tons. Photo: VCG

China will take a host of 10 measures, ranging from shifting to low-carbon energy to adopting green transportation methods, to achieve its carbon emissions peak goal, the State Council said in a document released on Monday, as the country formulates specific measures and timetables to fulfill its ambitious but difficult emissions control objectives.

Analysts said that reaching the goals not only requires a top-down approach, but also needs participation of market entities as well as cooperation among different parties, such as electricity networks in different regions, to help China get through the transition from being a coal-reliant economy to a clean-energy dominant country.

The document reiterates that China will achieve the target of peak carbon emissions by 2030, with a number of specific objectives such as reaching 25 percent of non-fossil energy consumption by 2030.

An integral part of the 10 actions is how the country would gradually replace traditional thermal power with power generated through new energy such as wind, solar and hydropower stations. Some specific targets and goals have been set to make that happen.

China also aims to increase hydropower capacity by about 40 million kilowatts during the 2021-25 period and again in 2026-30, as well as pushing the construction of hydropower projects in a number of river areas, such as the upstream Jinsha Jiang River.

During the period, China will curb coal use in many ways. It plans to control the growth of coal consumption in the 14th Five-Year Plan period 2021-25, while gradually reducing coal usage in the five years afterward. New coal power projects will be strictly controlled.

Ma Jun, director of the Institute of Public and Environmental Affairs, said that the target of wind/thermal power capacity should not be difficult to reach because of ample investment and technological progress. The goal of 1.2 billion kilowatts might even be exceeded.

However, the development of hydropower will be restricted by the need to protect biological diversity, while nuclear power will raise safety concerns. "In general, different energies should be used all together and in a cooperative way to help China pass the 'transition period' of energy adjustment," Ma told the Global Times.

Apart from structural adjustment, the government will push carbon reforms in many ways. For example, it plans to reach a carbon emissions peak in the energy-intensive steel sector by fostering mergers and acquisitions, which will raise the sector's concentration level.

It aims to push carbon reforms in the transport sector by having clean-energy vehicles account for about 40 percent of all transportation vehicles.

According to Ma, the most important way to reach carbon goals is to "grasp core problems" like carbon emissions sources, and approach the issue with the "two wheels" of government guidance and market participation.

"I think measures should be taken from the supply side to suppress carbon emissions, such as reining in high pollution" projects, Ma said.

China will pick 100 cities and counties to carry out trial carbon reforms, and landmark economic zones like the Greater Bay Area should lead the way in this transition, the document said.

The government also stressed that carbon reductions won't be "campaign like" or implemented rigidly, but should be pursued "in line with reality."