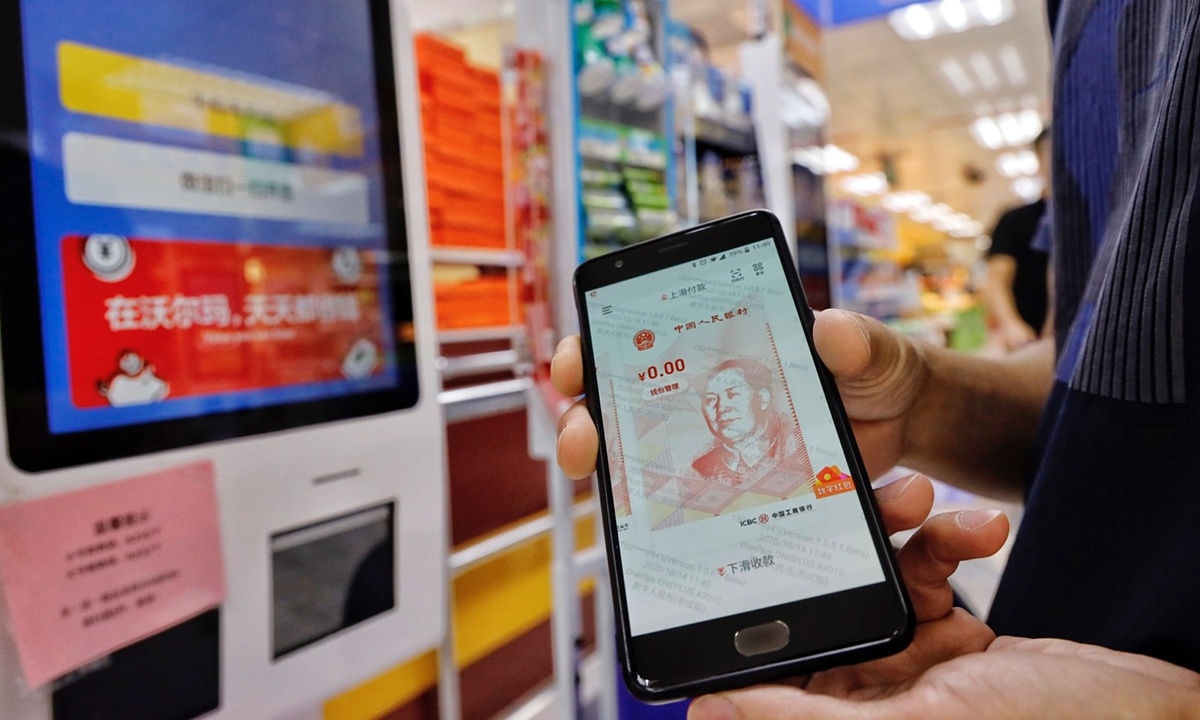 Residents who received "red packets" of digital RMB use the money in a store in Shenzhen, Guangdong Province, on October 14, 2020. (Photo: Li Hao/GT)

The global race to launch digital currencies is fiercer as central banks from more countries explore how to use the money of the future. In the competition, China has taken the lead thanks to an early start and abundant application scenarios aided by wide broadband coverage, which analysts said will help boost the internalization of the yuan against US dollar hegemony.

On Monday, the Bank of Japan said that it has been preparing for experiments on a Central Bank Digital Currency (CBDC) in early fiscal year 2021, to test the technical feasibility of the core functions and features required for the CBDC such as issuance, distribution and redemption.

The proof-of-concept phase one began on the same day and will continue through March 2022, the bank said in a statement on its website.

In addition, the US Federal Reserve Bank of Boston and MIT, which are developing prototypes for a digital dollar platform, aim to unveil their research as soon as July, Bloomberg reported.

In a separate report, Bloomberg said that European Central Bank President Christine Lagarde said that the institution could launch a digital currency in four years.

China's development of its sovereign digital currency is taking the lead thanks to an early start, early and comprehensive work on relevant standards and legal frameworks, as well as abundant application scenarios, industry observers said.

"China's research and development of its digital currency is self-driven and conducted in a prudent way to fend off financial risks. This is in contrast to other major economies, most of which are driven by the external environment, such as the coronavirus pandemic which promoted the need for digital trade settlement," Wang Peng, assistant professor of the Gaoli Academy of Renmin University of China, told the Global Times on Thursday.

Wang said that some Western economies such as the US and European countries could face hurdles in promoting their sovereign digital currencies, as it may require substantial time and costs to persuade their citizens and businesses to switch from credit cards to digital payment.

"It also requires a wide coverage of high-speed mobile telecom networks, which some countries need to improve as well," Wang noted.

With mobile network coverage and priority given to the project, it's widely expected that China would be the first major economy to launch a digital currency.

Industry insiders noted that the digital yuan is a very important means for China to speed up the internalization of the yuan.

As part of its moves to revive the pandemic-plagued US economy, the US Fed has cut interest rates to zero and implemented unlimited quantitative easing. Following the recently signed "Relief Bill" that totaled $1.9 trillion, the US has unleashed fiscal stimulus spending of $5.2 trillion since the coronavirus crisis began.

"Excessive US money printing is weakening the US dollar's position in the global economy. Against this backdrop, China - as a main engine of growth in the post-virus economic recovery - could promote the digital yuan into an international settlement system," Shentu Qingchun, CEO of Shenzhen-based blockchain company BankLedger, told the Global Times on Thursday.

Analysts said that China could conduct trials of the digital yuan in international trade in offshore yuan centers, such as Hong Kong. Similar tests could also be run in the Hainan Free Trade Zone.

"At first, China could conduct trials using the digital yuan in foreign trade point-to-point, and when conditions mature, the country could also facilitate a wider regional application," Wang said.

China could also use the digital yuan in trade with countries and regions along the Belt and Road Initiative, which enjoy close economic ties with China, Shentu said.

However, analysts noted that China's trial runs of the digital yuan should include tests of such functions as settlements for bulk commodity trading, deposits and withdrawals, among other functions.