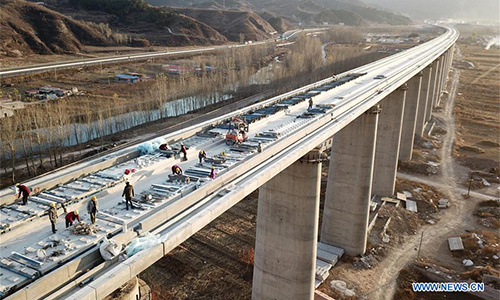 Workers install track boards at the construction site of the Baihe River Bridge of Beijing-Shenyang high-speed railway on Nov. 1, 2017. With a designed speed of 350 km per hour, the railway is expected to slash travel time between Beijing and Shenyang to 2.5 hours. (Xinhua/Chen Yehua)

China and Thailand on Wednesday signed a contract to build a section of China-Thai high-speed railway with an investment of $1.63 billion, according to media reports.

China-Thailand high-speed railway is a flagship project in jointly promoting the Belt and Road Initiative, in line with upgrading infrastructure construction as well as economic development in Thailand, China's Ministry of Foreign Affairs commented on the new contract on Thursday.

The project will link Thailand's capital city Bangkok and Nakhon Ratchasima, better known as Korat, in northeastern Thailand, according to China's embassy in Thailand. It also said the contract marks a significant step in the progress of the China-Thai high-speed railway project.

The contract is worth about 10.9 billion yuan ($1.63 billion) for the Bangkok-Nakhon Ratchasima section of the route, according to a report by the Bangkok Post. It said the Thai-Chinese high-speed rail project is expected to be completed in 2025.

After the completion of the project, it will improve Thailand's infrastructure and enhance connection between Thailand and its neighboring countries, boost regional economic development, and benefit people in Southeast Asia, said the Chinese embassy in Thailand.

The high-speed rail route is an important strategic asset that would increase the country's competitiveness and help develop cities along the rail route, the Bangkok Post cited a top Thai official as saying.

The trains will run at speeds of up to 250 kilometers per hour. Thailand will shoulder the total construction cost of 179 billion baht for the first phase, which links Bangkok and Thailand's northeast, according to a previous report by the South China Morning Post.

The planned second phase of the project will link Nakhon Ratchasima with Nong Khai on the border with Laos, which will connect with the China-Laos railway in a railway artery linking Thailand, Laos and China, according to Xinhua News Agency.

China is responsible for the design of the railway, supervision of construction and manufacturing of trains and signal systems, among others, in the spirit of "wide consultation, joint construction and shared benefits."

In 2017, Thailand and China jointly inaugurated the construction of Thailand's first high-speed railway from Bangkok to Nakhon Ratchasima.