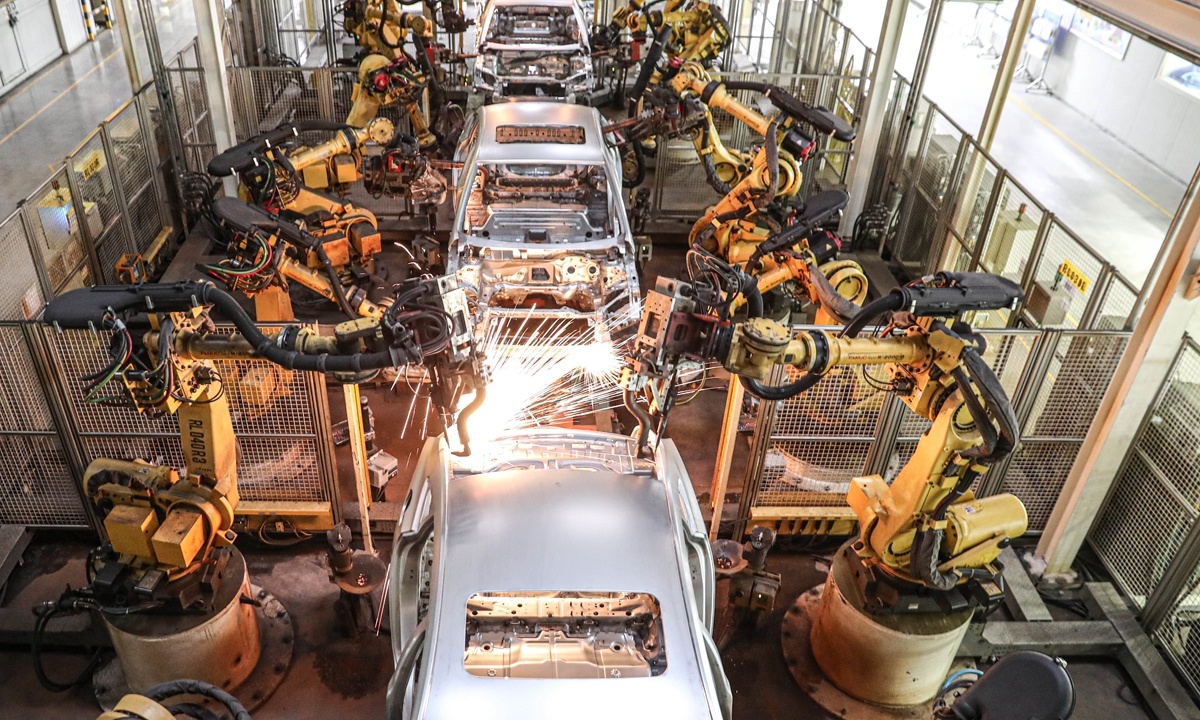 The automated production line at a car factory in Shenyang, Northeast China's Liaoning Province on Friday. Meng Wei, spokesperson from National Development and Reform Commission said recently that China's auto production and sales will reach about 25 million in 2020, and China's auto industry is expected recover to the previous year's level. Photo: IC

During the 14th Five-Plan (2021-25) period, China aims to strengthen innovation, and enhance efforts to deliver more breakthroughs in core technologies to create a more efficient domestic supply chain, while enhance its industrial base, officials said Thursday.

"Bottlenecks in our supply chains mean there are some areas that are still dependent on other countries, which harms our national security," Wang Zhijun, vice minister of Mistry of Industry and Information Technology (MIIT) said on a press briefing on Thursday.

According to Wang, China has reached made great strides in strengthening its industrial capacity and improving supply chain structure. However, some weaknesses of China's industrial base are still needed to be addressed, and China will launch further reforms linked to industrial base projects to coordinate resources, mainly focused on making breakthrough in key technologies.

"We will also set up several national innovation centers for the manufacture sector to promote the supply of industrial technologies, and facilitate the transformation and industrialization of new technologies," Wang said.

"China will also promote a robust market environment that encourages innovation and fair competition to address concerns of entrepreneurs who are unwilling or adverse to investment and innovation," added Lu Shan, director of MIIT's planning department.

Despite many achievements, China is relatively far behind in many fields including aviation engines, new materials, both which require long-term development. And China is likely to first concentrate on several bottleneck areas that are linked to national security, said Tian Yun, vice director of the Beijing Economic Operation Association.

"As addressing the weaknesses of China's industrial base takes time, it is unrealistic to overcome all the difficulties at once. By focusing on several key areas that other countries would use as chips to contain China could be the top priority in the beginning of 14th Five-Year Plan," said Tian.

According to Tian, strengthening international cooperation is also a priority for the country as China continues reform and opening up, and is likely to release further measures to attract international talent.

In 2015, China released it plan in manufacture sector called Made In China 2025, aiming to build China a great economic power in terms of advanced manufacturing focused on efficiency and sustainability.

"The MIIT's plan is in accordance with the 'Made in China 2025' vision, and fortification of China's industrial base is the foundation of the plan," Tian added.