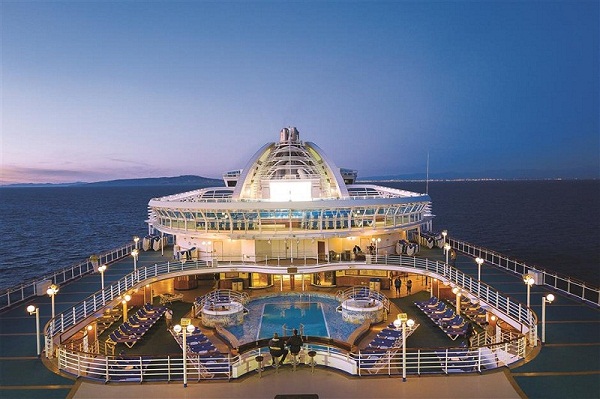 Cruise tourism is one of the most popular ways to go traveling. Shanghai has been actively pushing forward the cruise industry, extending the industry chain and promoting the international cruise service trade. (Photo: Shine.cn)

The contract is for two ships to be made for CSSC Carnival Cruise Shipping Ltd, a joint venture established to place orders.

The first liner will be 323.6 meters long and 37.2 meters wide. With a height of 72.2 meters, the 16-story cruise ship will have a variety of entertainment and recreational facilities. Apart from a dining room, and performance and amusement centers, it will be equipped with a shopping plaza.

The second ship will be delivered in December 2024. The two will operate for the new Chinese cruise brand under CSSC Carnival Cruise Shipping Ltd, according to a memorandum of understanding signed by Fincantieri, CSSC and Carnival Corp in February 2017.

Waigaoqiao Shipbuilding is aiming to produce three to four cruise ships a year, according to its chief technical officer Tao Ying. The shipbuilder, based in the China (Shanghai) Pilot Free Trade Zone, will start construction of the country’s first cruise ship next year after a year long overhaul of a shipyard.

“All-around preparatory work will kick off next year. As cruise shipbuilding is so much different from the cargo ships or container ships that we’ve built before, we have to transform our factory and convert the production flow,” said Tao.

The ship will be a floating “paradise” on the sea, which is even more difficult than developing an aircraft carrier, said He Qixing, manager of Waigaoqiao Shipbuilding’s cruise department.

Shanghai is expected to handle 25.7 million cruise ship passengers by 2022, according to a report by the Shanghai Academy of Social Sciences.

“Shanghai has made great progress in the past decade in developing the cruise economy, bucking the global trend when this relatively new type of tourism was hit by the economic downturn,” said Li Xiaonian, director of the academy’s Maritime Silk Road Research Center.

The biggest cruise port in Asia and the fourth largest in the world, Shanghai saw 512 cruise ships depart or dock at its three ports last year, receiving 2.97 million visitors, 43.3 percent of China’s total.

Global cruise giants including Carnival Corp, Royal Caribbean and MSC Cruises have made Shanghai a port of call.

Costa Cruises, an arm of US-based Carnival Corp, plans to bring two tailor-made ships in 2019 and 2020 to China, according to Mario Zanetti, president of Costa Group Asia. The company introduced cruising to China in 2006 and currently holds 26 percent of China’s cruise market.

MSC Cruise, the industry leader in the Mediterranean, South Africa and Brazil, is to operate its MSC Bellissima cruise ship in China, and Genting Group will deploy two 204,000-ton cruise ships that can accommodate 9,500 passengers at the Shanghai port in 2021.