China to build warship for Thailand 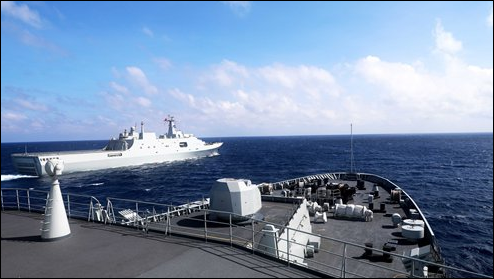 The amphibious dock landing ships Changbaishan (Hull 989, R) and Wuzhishan (Hull 987, L) attached to a landing ship flotilla with the navy under the PLA Southern Theater Command steam in formation in waters of the South China Sea during a three-dimensional amphibious landing operation from May 29 to June 3, 2019. (Photo: Global Times)

China and Thailand have signed a deal that will see a Chinese shipbuilding company build a Type 071E landing platform dock (LPD) warship for the Thai navy, a move which shows deepened arms trade cooperation between the two countries, a Chinese military expert said on Wednesday.

China and Thailand signed the agreement in Beijing on Monday, with the general manager of the China State Shipbuilding Corporation Limited (CSSC), Yang Jincheng, and the commander-in-chief of the Royal Thai Navy, Luechai Ruddit, participating, according to a statement CSSC released on Tuesday.

This also marks the first time China has exported an LPD, the statement said.

The statement did not provide further details, including the ship's worth or when the ship will be delivered.

The Type 071 LPD is a 20,000 ton-class warship that can carry combat personnel and equipment, including air-cushioned landing craft (LCAC), amphibious assault vehicles, tanks and helicopters.

It is part of the main battle equipment being used by China's People's Liberation Army Navy.

Thailand could use the warship to conduct naval transport missions, boosting the country's troop deployment capability in the high seas, Wei Dongxu, a Beijing-based military analyst, told the Global Times on Wednesday.

It can also be used for civilian purposes, like disaster relief and humanitarian rescue missions, because as a large naval platform, it can carry relief goods and get victims out of disaster areas, Wei said.

The variant of the Type 071 for Thailand is called the Type 071E, with the E possibly meaning "export." It could be a customized version based on the needs of the Thai navy, Wei said, noting that it will likely have no significant changes compared to the domestically commissioned ones in China.

Thailand operates other Chinese weapons like the VT4 tanks made by the China North Industries Corporation (NORINCO).

Wei said that arms trade cooperation between the two countries is getting deeper, and Thailand could purchase even more Chinese weapons like LCAC, amphibious assault vehicles, and helicopters that could fit the Type 071E.