China to buy more Russian soybeans amid trade war with US

Russian companies are eager to increase exports of soybeans and other agricultural products to China amid the China-US trade war. However, Russia's soybean exports are unlikely to replace those from the US, at least in the short term. 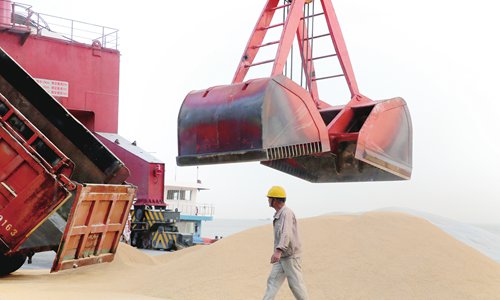 It is time for China and Russia to increase cooperation in agricultural investment and trade, Maxim Basov, CEO of Russia major agricultural company Rusagro Group, told the Global Times in a recent interview. "The focus now is shifting from the domestic market to the international market," Basov said, noting that the ongoing trade war between China and the US opens opportunities for Russia to sell more agricultural products to China and become a new partner. For now, only 1 percent of China's food imports come from Russia, which is still very low, Basov noted. Business representatives and Russian federal government officials expressed high interest in expanding food trade with China during the fourth Eastern Economic Forum (EEF), which ran from Tuesday to Thursday in Vladivostok, a city in the Russian Far East. Some of those participants said they expect more investment from China in Russia's agricultural sector. "We're now ready to invest in more agricultural projects… China will be an important investor in those projects," Nikolay Kharitonov, a member of the State Duma, the lower house of Russian parliament, who is also in charge of Far East affairs, told the Global Times during the EEF. Greater acreage and improved yields will see Russia produce 3.7 million tons of soybeans in the 2018-19 marketing year, up 8.2 percent from the previous year, according to a post on industry website agricensus in April. Russian soybean exports are forecast to reach 625,000 tons for the 2017-18 period, reflecting a good pace of shipments to China, the post said. Many Chinese companies have also shown an interest in investing more in the agriculture sector in Russia, with soybeans becoming a major focus. In 2017, the total grain output of Russia reached 135 million tons. The Russian Far Eastern region has great potential to expand output, China National Cereals, Oils and Foodstuffs Corp (COFCO) said in a document sent to the Global Times. "We attach great importance to Russia's soybean market. Recently, we shipped four 20-foot equivalent units of soybeans from Vladivostok to Qingdao [city in East China's Shandong Province] by sea for the first time," COFCO said. The Chinese company noted that the trial shipping route is part of its effort to accumulate experience for large-scale grain trade this fall.However, Russian soybean exports won't replace US products in China in the short term because of Russia's limited production capacity and transportation bottlenecks, industry representatives said. In the Russian Far Eastern region, there is no modern port that can handle bulk cargo like grain, a Chinese industry insider who runs an agricultural business in Russia told the Global Times. In spite of abundant resources in the Russian Far East, the estimated volume of soybeans that are available for export is about 400,000 to 500,000 tons per year, he noted. "Also, Russian soybeans are non-GMO [genetically modified organism] varieties, which are less welcomed by China compared with US products as genetically modified crop are designed for higher yield," he said.With more Chinese companies investing in Russian farmland, there have been reports that local residents had concerns over China's growing presence in the region. Russia is not offering the land to Chinese farmers for free, Alexander Borisovich Levintal, governor of the Jewish Autonomous Region, a Russian federal subject that borders Northeast China's Heilongjiang Province, told the Global Times during the EEF. "While Russia sells soybeans to China, Chinese companies invest in Russia with technology transfers [to the local agricultural sector,]" he said. To attract more foreign players to the agricultural sector, a special agency in Russia has been established. "This agency indeed is ready to provide Chinese companies with land - but only in exchange for investment in high-value production," Basov noted.