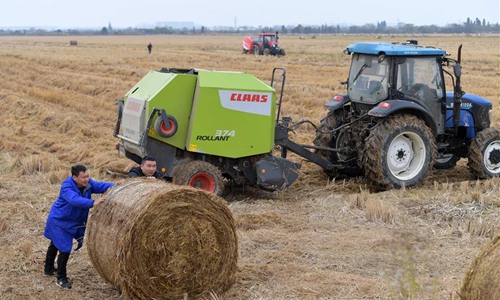 The EU will remain a solid source of wheat for China even though the phase one trade deal between China and the US is highly anticipated to be signed in the near future, experts told the Global Times on Monday.

Wheat imports from the EU, led by major wheat producer France, have surged nearly 450 percent from July 1, the start of the 2019/20 marketing season, to December 15, reaching 727,000 tons, according to official EU data.

The import figure from the EU is estimated to reach 1 million tons, the report said, citing grain market sources.

China has been actively exploring import sources for its agricultural goods since 2018 due to the ongoing trade war with the US.

The US once held as much as 60 percent of the market for China's wheat imports in the 2013/14 season. In 2018/19, exports of US wheat dived due to the trade war. The country's share of the market fluctuates heavily year-on-year as it competes with Australia and Canada, according to a report by the US Department of Agriculture (USDA) released earlier this month.

Imports from Australia and Canada have both slid these two years due to tense relations, said Jiao Shanwei, editor-in-chief of grain news website cngrain.com.

Expanding wheat imports from the EU has become an ideal alternative for China. The latter is world's leading wheat producer plus holding about half of the world's wheat stocks, Jiao told the Global Times on Monday.

The USDA report forecast that in the 2019/20 season, China's wheat imports will reach 3.2 million tons, ranking it No.10 among major import markets.

"Putting the two forecasts together, wheat imports from the EU would supply one-third of China's imports in total, which is a large portion," said Jiao.

"Even though the much-anticipated phase one deal between China and the US would be signed in the near future, it will not signify that the EU's new position would quickly be replaced," he noted.

In terms of agricultural products in the deal, two factors are key: whether the product is what China needs (some types of meat), or whether the product represents a large quantity of trading between the two countries (for example, soybeans), according to Jiao.

"Thus, it won't affect the wheat source," he added.

China and the US agreed earlier this month on the text of the trade agreement, under which Washington has committed to roll back tariffs in phases and Beijing will increase its purchases of US agricultural products based on market demand.

Data from China's General Administration of Customs showed that China has about 2.3 million tons of wheat in the first 10 months of the year with Kazakhstan and France as the major sources.