The Chinese government in 2019 will continue to open up the nation's bond market with measures such as clearing policies for overseas bond issuers in the Chinese mainland. 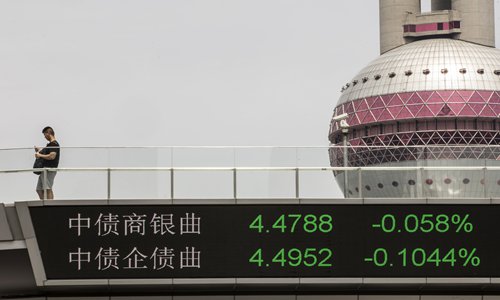 A man walks along an elevated walkway as an electronic ticker displays the figures of China Bond indices in Pudong's Lujiazui Financial District in Shanghai. File (Photo: VCG)

Experts said such moves are in line with China's general policy of financial opening-up.Recently, the National Association of Financial Market Institutional Investors (NAFMII) released a trial guidance document for overseas non-financial enterprises that use debt financing instruments in the mainland. The document is part of an effort to further open up the domestic interbank market, said a statement published on the NAFMII's website. The document said that overseas non-financial enterprises should register their information with the NAFMII and can issue bonds in the mainland within one year after doing so. They should inform the NAFMII if they plan to issue bonds beyond the one-year period.The proceeds of such issues can be used in China and abroad, the document said, but overseas companies must see to it that they use the capital according to relevant laws, regulations and government policies. "Such policy guidance, which clarifies the operating steps for overseas bond issuers that operate in the mainland market, shows the Chinese government's determination in terms of bond opening-up. It will encourage overseas bond issuers to participate more in yuan-denominated bond issuance," Zhou Yu, director of the Research Center of International Finance at the Shanghai Academy of Social Sciences, told the Global Times. This is the second time the government has cleared policy guidance for overseas issuers of yuan-denominated bonds in the mainland - widely known as the panda bonds - in recent months. The People's Bank of China, the central bank, and the Ministry of Finance jointly launched measures in September 2018 that were designed to boost issues of panda bonds. According to Zhou, the government tilted its policy focus from offshore dim sum bonds to onshore panda bonds after 2015. Other factors such as the yuan's internationalization, rising trade and investment between mainland and overseas companies, and the depreciating yuan, also drove up the scale of panda bonds. As of the end of 2018, 41 overseas participants had issued panda bonds worth 165.56 billion yuan ($24.55 billion) in the mainland, a Financial Times report noted on February 2.  Apart from standardizing and opening-up markets for overseas bond issuers, the government has also opened up the market for cross-border bond trading in recent years. For example, it has launched or updated cross-border capital channels such as the Qualified Foreign Institutional Investors (QFII) program and the bond link program between the mainland and Hong Kong.According to Zhou, this is in line with the government's general policy tone in recent years, which is to open up the financial market, particularly when it comes to overseas financial service providers. "The opening-up pace for the capital account has been a little slower in comparison, but it will never lag behind. I think both sectors will open up to a larger extent this year," he said. "In terms of the bond market in particular, I think the government will further ease the quota for capital flows such as the QFII quota. It will also launch measures to further ease panda bond issues. ""For example, the relatively low credit ratings of many bond issuers involved in the Belt and Road initiative (BRI) has hindered their business in the mainland. It's likely that the government will open a 'special channel' for BRI bond issuers to launch panda bonds in the mainland," Zhou noted. But experts also noted that barriers remain. Cao Yuanzheng, chief economist at Bank of China International, told the Global Times on Sunday that overseas financial service providers are reluctant to expand their businesses in the mainland as they find it hard to survive in a market where local services are already saturated."For example, when an overseas bond issuer issues panda bonds in the mainland, it will turn to a local bank to help with the procedures instead of working with an overseas company," Cao said, adding that also applies to other financial sectors such as banking.