BUSINESS China to overtake US as top importer: consultancy head

China to overtake US as top importer: consultancy head 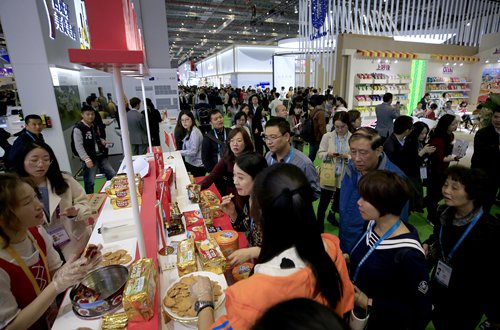 People taste imported delicacies at a food pavilion in the ongoing second China International Import Expo (CIIE) in Shanghai. Food remains the most popular commodity at this year's CIIE, with many purchasers talking to exhibitors outside the pavilion. (Photo: Global Times)

China is expected to overtake the US as the world's largest importer while retaining its position as the world's top exporter for years to come, the chairman of a blue-chip US consulting firm said in Beijing on Friday.

China "will continue to be the biggest exporter for many years to come," and current import data and estimated growth rates point to China becoming the biggest importer, Hans-Paul Bürkner, chairman of the Boston Consulting Group (BCG), said in an interview with the Global Times in Beijing on Friday.

Without giving a specific date for that to happen, Bürkner said, "I'm sure the government has made some careful calculations, [and] at some stage the Chinese economy will be the largest in the world, therefore the largest importer."

At a forum during the second China International Import Expo (CIIE) in Shanghai on Thursday, Vice Commerce Minister Wang Bingnan said China is expected to import more than $30 trillion in goods in the next 15 years and more than $10 trillion in services.

He reiterated the pledge by the Chinese leadership at the first CIIE in November 2018.

The official target means China's goods imports would reach $2 trillion a year on average over the next 15 years, according to Wu Jinduo, head of fixed income at the research institute of Great Wall Securities.

China's total imports grew 15.8 percent to $2.14 trillion last year despite grinding trade woes with the US, Chinese customs data showed. With the country gradually acclimating to the trade tensions and seeing a substantial improvement in trade with the ASEAN and the EU, and taking into account hopes for a phased trade deal between China and the US, the nation's imports will likely top $2 trillion this year, Wu told the Global Times on Friday.

She believes it's only a matter of time before China unseats the US as the top goods importer.

US imports of goods totaled $2.5 trillion in 2018, the highest on record, according to US Census Bureau data. The import gap between the world's two largest economies stood at less than $400 billion last year. This, adding to the gap in economic size, suggests that China's annual goods imports would surpass that of the US by 2025, according to Wu, also a part-time fellow of the Development Research Institute at Fudan University. China's GDP in 2018, based on the yuan's average exchange rate against the US dollar, was equivalent to over 66 percent of the US.

The path toward the top spot won't be a straight line, Bürkner stressed. "There would be periods of higher growth and lower growth, and maybe a year with negative growth, but then it would accelerate again and eventually it will happen."

The country's trade data beat forecasts in October, with both imports and exports falling less than expected, official data showed on Friday.

Still, import figures recorded a yearly decline for each month this year, except for April.

Latest US official data showed US exports were $206 billion in September, down $1.8 billion from August, while its imports totaled $258.4 billion, $4.4 billion less than in August.

China's imports market has yet to track with its booming consumer market, which could surpass the US as soon as this year, Lian Ping, chief economist of the Bank of Communications, told the Global Times.

A comparison between Chinese customs data and official US trade figures shows that mechanical and electronic items and high-tech products take the lion's share of Chinese imports, while consumer goods account for nearly one-third of US imports.

"That will also change," the BCG chairman said, adding that China's imports will "move from investment products to more consumer products and services. It's quite natural."

But "along with China's industrial upgrade and its growing strength in technological innovation, the nation will gradually cut imports of industrial products while increasing imports of consumer goods and high-end services," Wu added.

But that will still be a long way off in light of the nation's disposable income and per capita GDP, which underpin consumption and still lag behind the US, she said.

The shift is actually happening, with foreign business executives vowing to up the ante in the Chinese market at the ongoing CIIE.

"Over the past 15 years, our business has grown six-fold in China, and we have decided to target the mass mid-segment market to achieve further expansion. We are engaged in launching products targeting such a segment in our high-growth zones, particularly China and India," Scott Zhang, president of Honeywell China, told the Global Times in Shanghai on Friday.

"We are now localized in terms of R&D, engineering, manufacturing, and sales, which is the foundation for us to start this new business and enables us to compete in specific market. That's what we're going to do in China."