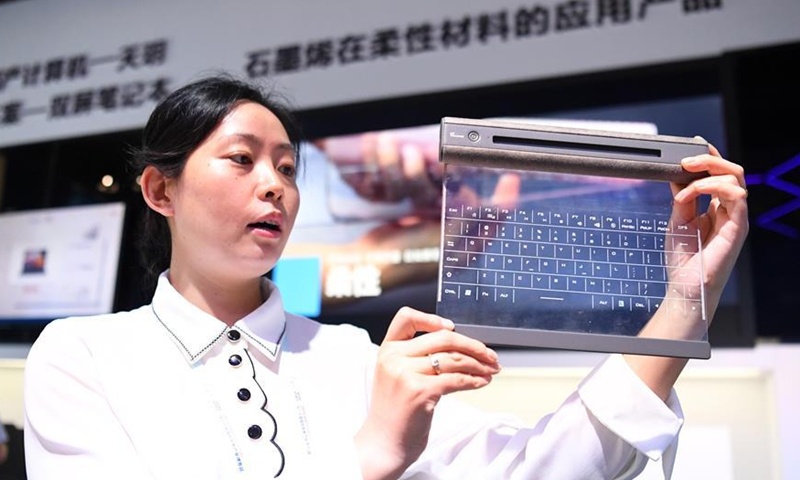 A staff member presents an exhibit during the 2020 Smart China Expo Online in southwest China's Chongqing Municipality, Sept. 15, 2020. The expo serves as a platform to promote global exchanges of smart technologies and international cooperation of the smart industry. (Photo: Xinhua)

China's top legislature is expected to pass a new export control law on Saturday, aiming to restrict the export of relevant national security-sensitive technologies that offers a "timely solution" to plug loopholes in China's regulation, as the tech war between China and the US intensifies.

The law, which will include the source code and algorithm in the restricted items, will better protect the rights and interests of Chinese technology companies overseas, as the US often uses export controls to fight competitors, Chinese observers said.

The law comes as big Chinese companies such as Huawei, ByteDance's TikTok, Tencent's WeChat and even Semiconductor Manufacturing International Corporation find themselves in Washington's target list.

The Standing Committee of the 13th National People's Congress (NPC), China's top legislature, is reviewing a draft export control law with major amendments, and is expected to adopt the measure in a session that ends on Saturday.

Xinhua News Agency reported that the draft law says China could take corresponding measures against any country or region which abuses export control measures to endanger national security and interests.

The official Legal Daily newspaper on Thursday reported that some legislators are advocating making a further clarification to the scope of items under the export control category.

Legislator Ouyang Changqiong proposed that the source code and algorithm should be in the controlled items, instead of being simply classified as technology or data.

Considering China has leading technologies in some fields, such as 5G and quantum communications, another legislator, Zhang Yesui, proposed that China should limit the export or transfer of these technologies to strengthen competition in comprehensive national power.

"If the source code is disclosed to foreign countries, domestic users will face a great threat, and even affect national security," Zuo Xiaodong, vice-president of the China Information Security Research Institute, told the Global Times on Friday.

In the past, some companies surrendered, and opened the source code to foreign companies for overseas business, which was dangerous. If the source code is grasped by other countries, it will greatly reduce the difficulty of attacking China from the technologies. But Zuo said "It is obvious that it is not an international practice to request a source code under the excuse of security assessment."

Algorithms are the core intellectual property rights in the AI era. It is the result of machine learning, derived from big data, and these big data reflect domestic users' habits, equipment conditions, and even economic operations. It cannot be arbitrarily disclosed, Zuo noted.

However, foreign governments such as the US have never stopped to give up the scheme, and TikTok serves as the latest example. The Trump administration had requested that it sell its algorithm to a US firm.

China issued in August a new exports control catalog that implicitly listed algorithms as controlled items, and the Ministry of Commerce said it is a timely update.

Experts said the new export control law is in line with the new exports control catalog, and it is also a timely solution for any loopholes in China's regulation as the country's foreign trade expands.

"It is a prescribed move as China rises as an international trading power. It is not aimed at any country, but acts as a backup measure for anyone who is unfair to and discriminates against China," Bai Ming, deputy director of the Ministry of Commerce's International Market Research Institute, told the Global Times.

Experts said that the law also applies to all companies in China, including foreign-invested ones. It does not mean China will harm its business environment.

Compared to the US, which always uses security excuses to hurt other countries' interests, China will not do the same. China, as the largest exporter in the world and a reliable global supplier, knows "it will be difficult to recover if the business environment gets hurt," Mei Xinyun, a research fellow at the Ministry of Commerce's Chinese Academy of International Trade and Economic Cooperation, said.