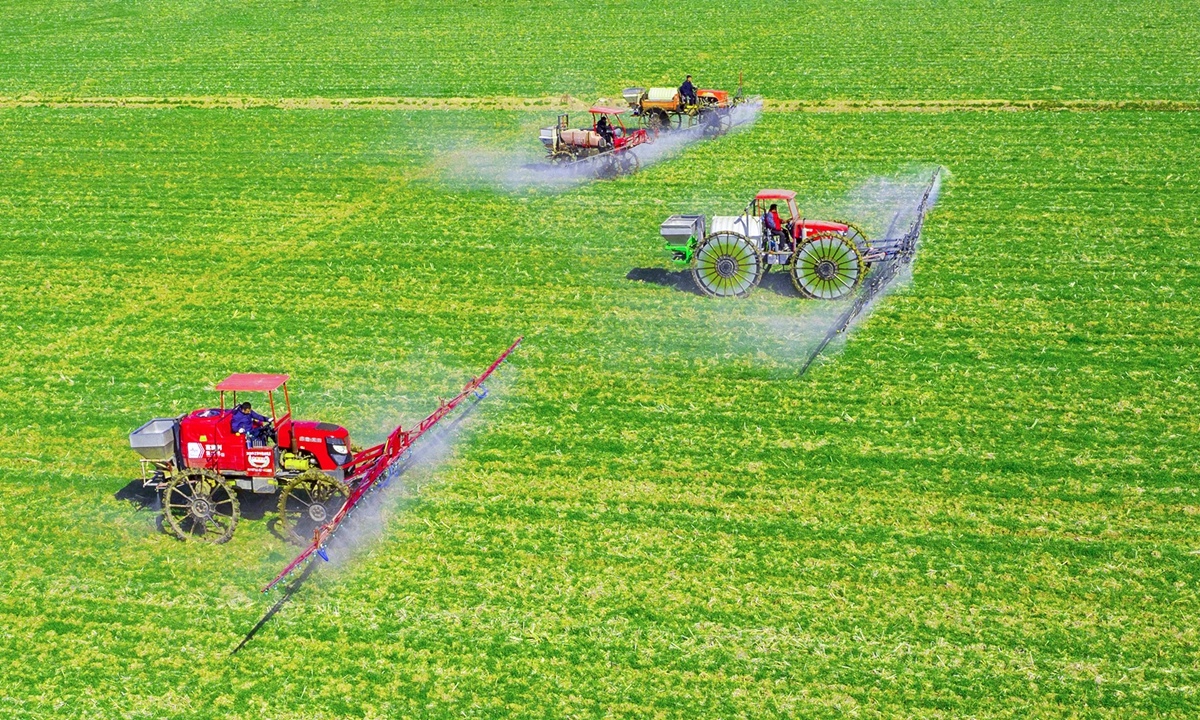 Farmers run tractors through wheat fields in Suqian, East China's Jiangsu Province on Thursday, right after the weeklong Spring Festival holiday. Around China, 22 million tractors and various types of specialized agricultural machinery are at the ready, according to the Ministry of Agriculture and Rural Affairs. (Photo: VCG)

China has vowed to reinforce its agricultural seed breeding sector to maintain national grain security. The move comes as the central government unveiled the "No. 1 document" for 2021 to renew its emphasis on boosting grain output and food security.

At a press conference on Monday, officials of the agricultural ministry said that China can guarantee farming seed safety, and any risks will be controlled.

"China is capable of producing grain seeds by itself. China's self-selected crop breeding area accounts for more than 95 percent of farming, and the majority of grain grown in the country is raised from domestic seeds," Zhang Taolin, vice minister of the Ministry of Agriculture and Rural Affairs, said on Monday.

The self-sufficiency rate of staple seeds for livestock and poultry has reached 75 percent, while the rate is 85 percent for aquatic products, according to Zhang.

However, officials acknowledged that China's seed industry has a lot of ground to make up, compared with advanced countries.

The yield level of China's soybean and corn crops is less than 60 percent of the US rates, and imported storable tomatoes and bell peppers account for more than 50 percent, Zhang noted.

The efficiency of hog reproduction, the feed conversion rate and the annual milk yield only hit around 80 percent of the international advanced level.

In addition to the type of seeds, the protection of seed resources and core technologies in seed breeding lag behind those of most advanced countries, the official pointed out.

Agricultural experts agreed that seeds for China's main grain crops - wheat, rice and corn - can shed their import dependence, but it will take a long time to improve the domestic breeding of hogs, cows and white feather broilers.

The task of reinforcing the agricultural seed breeding sector is an extremely difficult one that requires many resources such as long-term fiscal support to protect seeds and carry out new seed development projects, Li Guoxiang, a research fellow in the agricultural sector at the Chinese Academy of Social Sciences, told the Global Times on Monday.

Li pointed out that China leads the world in hybrid rice seeds thanks to years of work by Yuan Longping, a renowned Chinese agronomist dubbed as the "father of hybrid rice." However, the country has seen a loss of many other original seeds that weren't properly protected, resulting in a stranglehold by other countries in original seeds, he said.

As part of the overall effort, China has been trying to preserve seeds by setting up crop gene banks. The Beijing-based National Crop Gene Bank of China under the Chinese Academy of Agricultural Sciences has preserved 340 types of crops, the Xinhua News Agency reported.

"The Nanfan Scientific and Research Breeding Base - China's Agricultural Silicon Valley, which is mentioned in the policy document - is also ramping up efforts on crop breeding in South China's Hainan," Nie Fengying, expert at Chinese Academy of Agricultural Sciences, told the Global Times.

The "No. 1 document", released on Sunday, lays out top-level design and systematic deployment aimed at strengthening the breeding industry, involving every step in the industry chain and encouraging new technologies to achieve better breeding, from genetic resource conservation and breakthroughs in breeding R&D to market regulation of the breeding industry.

The document also suggests stronger protection of intellectual property rights in breeding and a sound commercial breeding system with a group of leading seed companies.

"The global breeding industry is undergoing a scientific and technological revolution, marked by modern biological breeding, such as gene editing, synthetic biology and artificial intelligence. We need to grasp opportunities and speed up innovation to achieve leap-frog development," Zhang said.

Biological breeding is a new stage of scientific innovation in the seed industry. Yuan's team's hybrid has been widely adopted domestically, while gene editing has become increasingly mature, Li said, noting that China is almost on par with developed economies in downstream seed breeding achieved by using original seeds.

In terms of international cooperation, Li said that talent exchanges between China and other countries will continue in China's march to build a modern breeding system.

"The US previously led the world in biological breeding but US companies like Monsanto Co now are going downhill as they are dragged down by the negative impact of transgenic technologies, and Switzerland-based Syngenta has been acquired by ChemChina," he said.