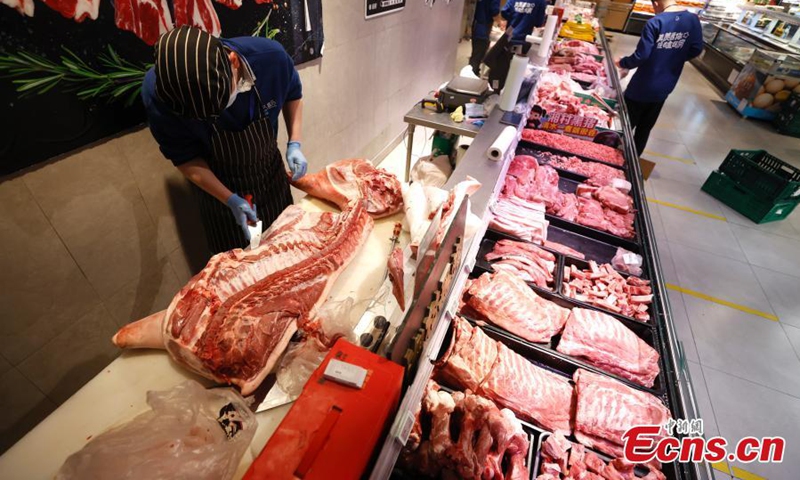 China plans to release a batch of central pork reserve this week for the fourth time this year, as the steep rise in pork prices lately has triggered a "second level warning," according to a notice released by the National Development and Reform Commission (NDRC) on Tuesday.

During the week from September 19 to 23, the average weekly retail price of lean pork in 36 large- and medium-sized cities rose 30 percent from levels recorded during the same period last year. It has entered the second-level warning range set in a price stabilization work plan of the government, said the NDRC, the country's top economic planner.

According to the work plan, the authorities will issue the second-level warning when the average retail price of lean pork in the 36 cities rises between 30 and 40 percent year-on-year during a given week.

Currently, the overall production capacity of hogs in China is reasonable and abundant, and number of breeding sows, newborn piglets and feeder pigs are all increasing. The price of hogs has been at a historically high level, but there is no basis for a sustained and substantial rise, the NDRC said.

The NDRC also suggested farmers to make reasonable arrangements for production, and maintain a normal pace of breeding and production.

As of 2pm Monday, the average price of pork in China's agricultural wholesale markets stood at 31.28 yuan ($4.36) per kilogram, up 0.6 percent from last Friday, according to the Ministry of Agriculture and Rural Affairs.

The ministry held a meeting on Monday to arrange the work of ensuring a stable hog yield and supply during the fourth quarter. It noted that the current hog production and supply situation has continued to improve, the number of breeding sows is at a normal level, and the number of hogs in stock has increased for five consecutive months.

On September 8, the NDRC released this year's first batch of central frozen pork reserves in order to ensure supply and stable prices as the country's two major holidays - the Mid-Autumn Festival and the National Day Holidays - draw near.

Pork prices saw a rapid growth since July, since a previous price drop had impacted hog farmers' enthusiasm for production, and when a price increase cycle begins, farmers have tended to hoard stock seeking to maximize profits. In the meantime, major holidays are approaching and the country's restaurant and catering sector continues its recovery.

The NDRC said it will continue to release the central pork reserve through working with relevant departments in light of market conditions, and further increase the release volume when necessary to promote the smooth operation of the hog market.