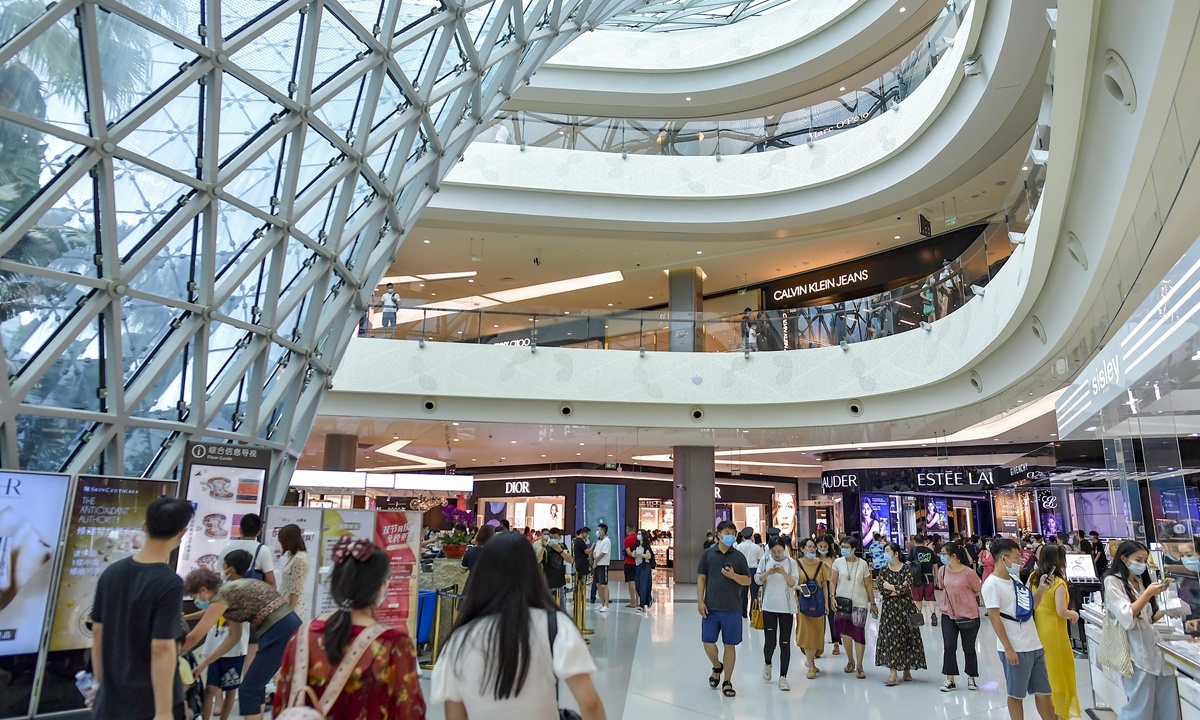 Customers shop at a duty-free mall in Sanya, South China's Hainan Province. Officials from Hainan said on Monday that sales of duty-free goods amounted to nearly 100 billion yuan ($15 billion) in the past 10 years, and the number of shoppers exceeded 25 million. Duty-free sales account for about 40 percent of Hainan's domestic tourism revenue. Photo: cnsphoto

The Hainan Free Trade Port will set up a work station assigned to address trade friction, as part of two new innovative mechanisms designed to help protect local businesses and industries in global trade disputes, an official with the Ministry of Commerce (MOFCOM) said on Monday.

The port will also set up a trade adjustment assistance mechanism to help companies cope with impact from higher levels of opening, according to Tang Wenhong, director of the MOFCOM's department of pilot free trade zones and free trade ports.

In response to a question from the Global Times, Tang said at a press briefing in Beijing that the initiatives are devised to ensure risk prevention while building Hainan into a free trade port, as the central government has emphasized the need to coordinate development and security - two top priorities.

SMEs tend to be weaker in bearing risks, so the work station was designed to mainly serve SMEs and allow for the sound development of local businesses, he continued.

Describing the trade adjustment assistance mechanism as a novel idea for notably Chinese firms, Tang said that the mechanism would provide assistance to industries and companies, SMEs in particular, that are affected by a higher level of opening-up, enhance the competitiveness and resilience of businesses and foster industrial restructuring.

The latest initiatives came as China speeds up efforts in building Hainana into a world-class free trade port.

Also on Monday, a draft Hainan free trade port bill was submitted to the Standing Committee of the 13th National People's Congress, China's top legislature, for a second reading.

The draft bill stipulates that except for items that make up the list of imports and exports banned and restricted by the Hainan free trade port, all other goods can freely flow between overseas destinations and the port with customs assuming a law-based supervisory role.

Earlier this month, the MOFCOM, together with 19 government departments including the country's top economic planner, the finance ministry, the central bank and the foreign exchange regulator, unveiled measures to push for the port's trade liberalization and facilitation.