BUSINESS China to show a continuance of monetary and fiscal policy next year: analysts

China to show a continuance of monetary and fiscal policy next year: analysts 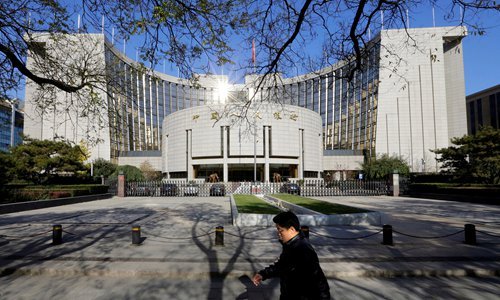 A man walks past the headquarters of the People's Bank of China, the central bank, in Beijing. (File photo: VCG)

China will maintain its prudent monetary policy and proactive fiscal policy in 2021 as uncertainties over pandemic fallout persist, but the overall tone will return to neutral with a gradual exit from a targeted easing policy, economists said, after the country's central bank made its biggest-ever injection of medium-term funds on Tuesday to boost liquidity.

The People's Bank of China (PBC), the country's central bank, said it had issued 950 billion yuan ($145 billion) worth of one-year medium-term lending facility (MLF) loans to financial institutions, according to a statement on the PBC's website on Tuesday.

The interest rate was kept at 2.95 percent, unchanged for an eighth straight month.

Analysts said the move -- ahead of the tone-setting Central Economic Work Conference that is scheduled to take place later this month — sent a signal that China is not likely to tighten its monetary policy in the short term, when liquidity is strained ahead of the Spring Festival holiday, and the Chinese economy, in particular consumption and employment, has not bounced back to the pre-epidemic level.

At a meeting of the Communist Party of China (CPC) Central Committee Political Bureau last Friday, Chinese officials acknowledged that rising uncertainties are associated with the COVID-19 pandemic and external environment. Also, Chinese central bank officials warned against the risk of a "policy cliff" -- a sudden turn of policy direction — in recent days.

"Monetary policy is likely to remain relatively loose in 2021, channeling enough funds to the real economy to keep factories running and stabilize employment," Dong Dengxin, director of the Finance and Securities Institute at the Wuhan University of Science and Technology, told the Global Times on Tuesday.

As sporadic new coronavirus cases have been reported across China, which may prompt Chinese people to take a more cautious attitude toward consumption and travel, it is vital that monetary policy ensures Chinese consumers' spending power in the next year, analysts said.

"Looking ahead, Chinese policy-makers will coordinate macro policy in a flexible manner, depending on how the economic situation evolves," Dong said, noting that Beijing could cut banks' reserve requirement ratio in the second half of 2021, if necessary.

But analysts noted that some tailored easing policies aimed at tackling the impact of the coronavirus will be phased out.

For example, China is not likely to issue special Treasury bonds for combating COVID-19 next year, Dong said. He also predicted that quotas on local governments' special-purpose bonds will be reduced.

As part of efforts to prop up its virus-hit economy, China issued 1 trillion yuan in special Treasury bonds for COVID-19 control and economic recovery in 2020.

According to a report by the Guotai Junan Securities, China could also lower its fiscal deficit ratio next year to 3-3.5 percent or even lower, from 3.6 percent in 2020.