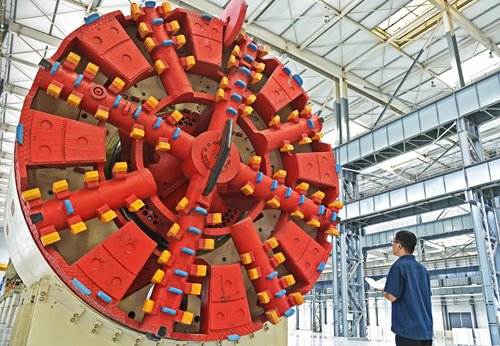 An engineer checks on a tunnel boring machine at a CITIC Heavy Industries plant. (Photo: VCG)

Chinese policymakers are trying to accelerate massive reforms of the country's State-owned enterprises (SOEs) and are taking a slew of measures to create a better environment for private sector companies, in an effort to stimulate domestic economic activity amid mounting foreign and domestic pressure.

The efforts, highlighted in a series of recent meetings and policy directives, reflect a sense of urgency among top policymakers to counter challenges from an ongoing trade war with the US as well as disappointing domestic economic indicators for investment and consumption, a weakening currency, and a bearish stock market. But experts have said that the reform efforts should focus on efficiency, rather than mere speed amid the short-term pressure.

On Friday, Xiao Yaqing, chairman of the State-owned Assets Supervision and Administration Commission (SASAC), convened a meeting to map out detailed plans for carrying out reforms at hundreds of SOEs and ordered local officials and selected SOEs to "take responsibility and ensure the goals and tasks are met and completed."

In line with earlier SOE reform plans approved by the State Council in March, SASAC issued a work plan last week, in which it identified nearly 400 SOEs needing market reforms before 2020.

"[The reform plan] is an inevitable requirement for deepening SOE reforms and a way to add urgency to the reforms," Xiao said at the Friday meeting, which was watched live by officials from State-owned assets regulators and SOEs across the country.

Liu Xuezhi, a senior analyst at Bank of Communications, said that while China's reform agenda has long been set and does not have anything to do with the ongoing trade war with the US or other external factors, rising pressure does require faster implementation.

"We do face relatively big pressure both externally and internally, and this could further intensify if we don't take any measures," Liu told the Global Times, adding that accelerating SOE reforms could boost confidence in the Chinese economy as well as "revitalizing" SOEs' massive assets.

"This will definitely help ease the pressure."

But Sun Lijian, an economics professor at Fudan University in Shanghai, said that while there is pressure for faster implementation of SOE reforms, officials should not lose sight of the "real purpose" of these efforts.

"The reforms are rightly aimed at achieving three things: improving efficiency, increasing the role of the market and modernizing management. No matter how much pressure we face, our efforts cannot diverge from that," Sun told the Global Times.

At the meeting, Xiao stressed that efforts should focus on "improving SOEs' operational efficiency, marketization and modernization in an all-round way."

Sun added that although pressure is mounting, "there is still a lot of room" for policymakers to carry out these reforms in a proper manner. "Our biggest advantage is the huge domestic market, which can offer a buffer so that our reform course is not complicated by pressure from the trade friction."

Chinese policymakers are also taking other measures to counter challenges facing the economy.

At an executive meeting of the State Council, China's cabinet, top officials led by Premier Li Keqiang mapped out reform measures on Thursday, including opening more sectors such as healthcare to private investors, and reducing the tax burden on private companies.

"Private investment is an important supporting force in stabilizing growth, structural adjustment and boosting employment," Li said at the meeting, which determined that further reform and opening measures are needed.