China to voice support for globalization, reassure investors of growth at Davos forum

The World Economic Forum kicked off its annual meeting in the Swiss winter resort town of Davos on Tuesday, as the global economy faces risks from rising trade tensions to downward pressure on global economic growth. 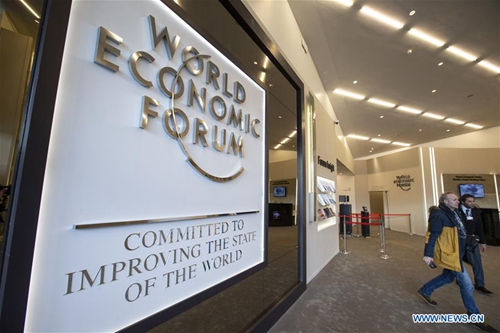 People walk by the logo of the World Economic Forum (WEF) in Davos, Switzerland, Jan. 21, 2019. The WEF Annual Meeting will kick off in Davos on Tuesday. (Photo: Xinhua)

While several leaders of major economies are sitting out this year due to their own domestic issues, Chinese officials led by Vice President Wang Qishan are expected to voice continued support for multilateralism and reassure global investors of China's ability to maintain stable growth and carry out further reforms and opening-up.

Although there were not many noticeable changes to this year's annual meeting, also referred to as the Davos forum, the unease among participants about the uncertainties of the global economy was palpable, according to Lin Boqiang, a professor at Xiamen University in East China's Fujian Province who is in Davos to attend the meeting for a ninth consecutive year.

"There are a lot of people here who are very worried about the uncertainties and who are very anxious to hear from world leaders so they can make their judgments about the way forward," Lin told the Global Times on Tuesday.

Economic globalization, which the forum promotes, has been threatened in recent years, but the drama surrounding this year's forum points to serious troubles for the global economy and the multilateral system, Lin said.

The IMF cited weakness in Europe and some emerging markets and unsolved trade tensions for the cuts.

A forum survey released January 16 also warned that geopolitical and geoeconomic tensions are the most urgent risks for 2019, with 90 percent of experts expecting further economic confrontation between major powers in the year.

"It is just a very tough time wherever you look," Wang Jun, an expert at the China Center for International Economics Exchanges in Beijing, told the Global Times Tuesday.

"We're starting to see that the anti-globalization wave has already taken a toll on the multilateral global trade system," Wang said.

Major economies have turned inward, Wang noted, consumed by domestic issues that throw globalization onto the back seat.

One of the major forum headlines is the absence of leaders from the US, the UK and France dealing with different domestic concerns.

Washington faces a prolonged partial government shutdown, while the UK is suffering a bitter political fight over its exit from the European Union. Meanwhile, France is seeing persistent protests on the streets of Paris.

This year's Davos forum attracted more than 3,000 people from more than 110 countries and regions and more than 65 heads of state or heads of top international organizations.

They include German Chancellor Angela Merkel and Brazil's new President Jair Bolsonaro, according to forum organizers.

There is also a strong show of Chinese officials and business leaders including Vice President Wang Qishan and Alibaba Group Chairman Jack Ma Yun. Wang is scheduled to deliver a keynote speech on Wednesday.

"With the leader of the US absent, many will turn their attention to Vice President Wang's speech for any clues about ongoing trade negotiations between China and the US," Lin of Xiamen University said. "China-US trade tension is one of the closely watched topics."

Chinese and US officials are set to hold a new round of talks in Washington later this month, aiming to strike a deal to end the trade war before March 1.

At Davos, Wang Qishan and other Chinese officials are expected to voice China's support for the global multilateral trade system and try to calm global investors about their worries over the Chinese economy.

"This is a meeting about globalization and so the core message of Wang's speech will be about China's support for globalization," said Wang Jun, the expert at the China Center for International Economics Exchanges. "This is also a great opportunity to reassure global investors about China's economy and reform and opening-up, so I expect there will be some comments about that."