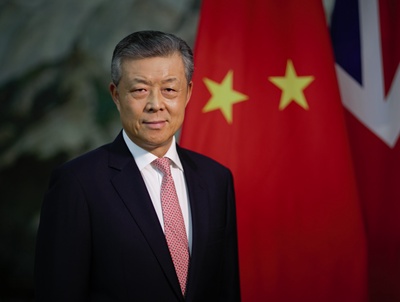 "Global Services, Shared Prosperity" - this is the theme of China International Fair for Trade in Services held in Beijing earlier September. CIFTIS 2020, an extraordinary event at an extraordinary time, is the first offline major international trade fair in China since the outbreak of COVID-19.

In his congratulatory remarks at CIFTIS, President Xi Jinping proposed "three initiatives" to the international community, namely, to foster an open and inclusive environment, to unleash the power of innovation, and to promote mutually beneficial cooperation. This is a positive message to all the members of the international community, calling on them to join forces in hard times, strengthen open-up measures and cooperation, and share the opportunities for development. This also injects strong impetus and positive energy into world economic recovery.

The world economy thrives in openness and withers in seclusion. China is reassuring the world of its continued confidence in opening up its market. Recent years have seen ever bigger and more solid strides taken by China in opening up the service sector: the Pilot Program of Innovative Development of Service Trade is expanded to 28 cities and new development areas; 26 open-up measures are introduced in key sectors such as education and medical, financial and professional services; the recently released 2020 Foreign Investment Negative List will greatly ease restriction on foreign investment in financial, infrastructural and transportation sectors; and a negative list for cross-border service trade will be released before the end of the year.

In line with the current phase, environment and condition of its development, China made a strategic decision to introduce the "dual circulation" growth pattern whereby the domestic economic cycle will play a leading role while international economic cycle remains its extension and supplement. This new growth pattern is not a closed domestic cycle but an inclusive one that connects domestic and international markets. Regardless of any changes in the world, China will continue to open its door even wider and make the pie of service trade even larger. Going forward, the potential of China's super large market will be gradually released to create more opportunities for its global partners.

Right now, the pandemic has not been put under complete control worldwide, causing international trade and investment to slump and making it even harder for economies to recover. Service sector and open cooperation in service trade have become increasingly important and powerful economic drivers in China and around the world. In 2019, services' value added accounted for 53.9 percent of GDP and 59.4 percent of economic growth of China. China's import and export total of services has ranked No 2 in the world for six consecutive years.

China shows the world that it is willing to take up its due responsibility to boost global recovery and growth by hosting CIFTIS, a comprehensive, national-level, international exhibition and trading platform with a global reach and dedicated to trade in services. It has attracted the participants from 147 countries and regions including the United Kingdom, 33 international organizations, 47 foreign embassies in China, 110 overseas business associations and institutions and 17,000 enterprises. As an important bridge linking Chinese and foreign services companies, CIFTIS enabled all participants to showcase their latest developments and breakthroughs in service trade and share in the new technologies and benefits of human progress.

Covering all twelve major fields of the service trade defined by WTO, CIFTIS has demonstrated China's firm resolve in upholding free trade and multilateral trade system. To meet the needs for growing trade in services, China will promote greater harmonization of rules for the services sector at the multilateral and regional levels, foster diverse partnerships with foreign governments, international organizations, business associations and enterprises, support the establishment of a global alliance for trade in services and advance cooperation in service trade within the framework of Belt and Road Initiative so that people in different countries will all benefit from a growing trade in services.

Britain has a strong tradition in service trade, hence the huge potential and broad prospects for cooperation with China. At the CIFTIS, the UK was represented by more than a dozen British institutions, organizations and enterprises, including the City of London, the government of Wales, GSK, Refinitiv, PWC, Royal Mail, Dulwich College, Loughborough University, University of Oxford Press, The Investment Association, China Britain Business Council and the National Centre for Entrepreneurship in Education. I hope British business leaders have made good use of the CIFTIS platform by seizing this opportunity to engage in open cooperation and achieve mutual benefit. I look forward to joint efforts from China and the UK in deeper and more substantial cooperation so as to enable global trade in services to thrive and make the world a better and more prosperous place.

The author is Chinese ambassador to the UK. The views don't necessarily represent those of China Daily.