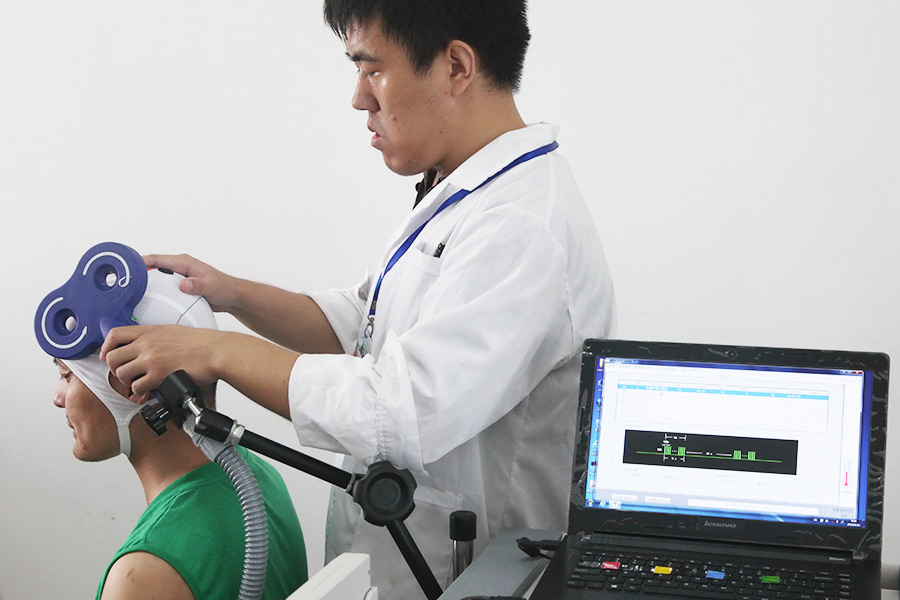 A doctor in one of Shanghai's rehab centers fits a VR helmet on a patient to test his addiction levels. (Provided to China Daily)

Artificial intelligence is being increasingly used in medicine to examine medical scans and spot signs of diabetes, among other applications. In China, artificial intelligence is expected to play a much bigger role than many other countries, especially since there are only 1.5 doctors for every 1,000 people in the country, compared with 2.5 for every thousand in the United States, according to MIT Technology Review.

As part of its nationwide AI push, the country has been beefing up its healthcare facilities using the latest AI technology. Local researchers are already developing a variety of AI tools for medicine, including ones that can assist staff members at drug rehab centers to assess levels of addiction and another that helps children suffering from autism to improve their perception of people and surrounding environment.

In Shanghai, nearly 1,000 addicts in three of the city's five rehab centers, including one for exclusively for females, have been using a virtual reality system complete with an eye-movement tracking system when users put on a VR helmet and "walk into" scenes with drugs. Their eye movement and biological indicators, such as their heart rate and skin conductivity, are recorded in an objective way to show their levels of addiction.

Around 1,000 children suffering from autism in the city have also been using a VR system simulating real-life scenarios for interactive training.

In some cases, AI can do more than just assist medical professionals, it can also help the counter the affects of the country's acute shortage of doctors.

One hospital in Guangzhou, for instance, has been testing an AI system for the diagnosis of autism in children aged as young as 2 years old. The system, jointly developed by the Third Affiliated Hospital of Sun Yat-sen University in Guangzhou and the Duke Kunshan University, has achieved an 80 percent accuracy rate in screening 120 toddlers who were diagnosed with autism, the team behind the system said during a recent forum at DKU.

The system represents a major development in screening for child autism, which is considered a challenge in China due to the lack of experienced pediatricians who can perform accurate diagnoses.

Experts predict more AI tools will be developed in the country. A recent report from the International Data Cooperation predicted that China's market for AI healthcare services would grow to $930 million by 2022.