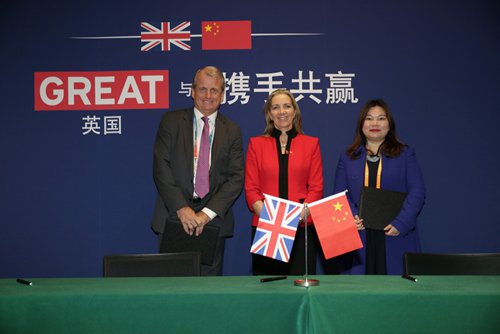 Rona Fairhead (center), British minister for Trade and Export Promotion, attends a signing ceremony at CIIE in Shanghai on Wednesday. (Photo: Courtesy of the British Consulate-General in Shanghai)

China's determination to further open up is creating more opportunities for foreign creative industry firms to explore the nation's huge market and seek cooperation with their Chinese peers.

"This is fantastic news which will bring growth to the creative sectors in the UK and China," Rona Fairhead, British minister for Trade and Export Promotion, said at a signing ceremony for the eight deals on Wednesday.

The film industry is an important and well-developed part of the creative field in the 66 million-population UK. Whereas China, the most populated country in the world and the world's second largest movie market with revenue reaching 55.9 billion yuan ($8.05 billion) in 2017, has yet to produce many global hits.

"We have a very rich capability [in the film industry]," Fairhead told the Global Times, citing globally popular British works such as Harry Potter and Game of Thrones.

"To my mind, as China goes further into film, it's about [the UK film industry] taking the best of its world-class capabilities to cooperate with Chinese companies and make sure that you benefit from the innovation that we have."

Fairhead pointed to immersive technology as an example of innovation in the film industry.

"It's not just a presentation on screen, but a real immersive experience," she said. "That's the next stage."

"Having discussed the program with filmmakers from all over the world, I eventually chose to work with Immersive," Mirror Pictures President Jiang Chuanrong told the Global Times.

"It has a very professional visual arts and technology team who once contributed to the opening ceremony performance at the London Olympics."

According to the agreement, Immersive will send its employees to China to work together with Mirror Pictures on the program.

"We plan to release our first work in 2019, and then gradually go global," Jiang said.

Another two big parts of the creativity industry, sports and gaming, are becoming increasingly interrelated nowadays.

"We see the CIIE as a really momentous event," she said.

"By opening-up and improving our trading, we create more jobs for the two countries, and we share innovation particularly in the creativity industry."