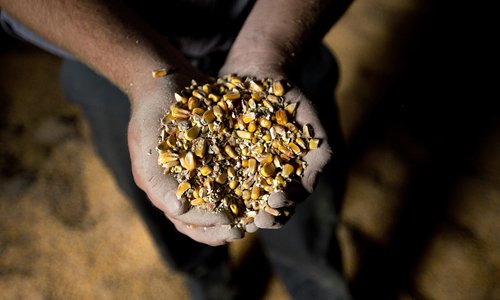 An employee holds a handful of corn inside of a grain silo in Kalida, Ohio, the US. (Photo: VCG)

Ongoing trade tension between China and the US is likely to ease in the near future, but some volatility in the bilateral relationship may remain, and Beijing's resistance to external pressure has far exceeded US expectations, Chinese experts said on Monday.

Nothing can shake the firm stance and determination of the Chinese government to maintain growth and pursue a modern, strong nation, they said during a seminar on "China and the World's Development" held at the National Academy of Development and Strategy at Renmin University of China.

"It is probable that the two countries will reach a preliminary deal prior to the US presidential election in 2020," said Wang Honggang, director at the Institute of American Studies with China Institute of Contemporary International Relations.

"US President Donald Trump needs such a deal... before the election," Wang told the Global Times on Monday on the sidelines of the seminar.

If a deal is reached, it will be a framework one without genuine measures to carry it out since it will avoid core issues like China's economic model, which "we will never give up," said Wang.

"Actually, the US side has realized that China will not compromise on such crucial issues. We cannot expect one deal to solve all the bilateral differences in terms of economy and strategy," he added.

Chinese Vice Premier Liu He spoke with US Trade Representative Robert Lighthizer and US Treasury Secretary Steven Mnuchin by phone at the US side's invitation on Thursday, and they exchanged views on how to carry out the consensus reached by the two countries' leaders during the G20 summit at the end of June.

Unidentified Chinese enterprises have inquired with US exporters about the purchase of agricultural products and also applied for the lifting of Chinese tariffs on the farm products in accordance with the regulations of the Customs Tariff Commission of the State Council, according to a report from the Xinhua News Agency on Sunday, citing Chinese authorities.

"I believe there are chances for bilateral tensions to ease in the near future toward a good outcome and the US officials might come (to China) for face-to-face negotiations," said Wang.

The resilience of the Chinese economy featuring stable, high-quality and sustainable growth, with great potential, has proved that there is a limited impact from the trade war.

China's GDP grew 6.3 percent year-on-year in the first half of 2019, down from 6.4 percent in the first quarter but falling within the annual target set by Chinese policymakers.

"Many people would ask what is the strongest aspect for China right now. The answer is its economy," Liu Yuanchun, vice president of Renmin University of China, told the seminar.

The tariff war, initiated unilaterally by the US, has made geopolitical relations and economic ties evolve in an irrational direction, which is not what Trump wanted, according to Liu. "A crackdown on China's exports is actually hitting US producers and its transnational enterprises," said Liu.

The US government has called for a manufacturing return by US-based enterprises like Apple Inc, "but the fact is that more and more US firms are setting foot in the Chinese market, which they are not willing to give up," he added.

China and the US have not entered a cold-war phase, and they shouldn't, said Gao Fei, vice president of China Foreign Affairs University, during the seminar. He noted that containing China will only leave the US in an isolated position. "We need bottom line thinking for key technologies and macroeconomic and policies and others when it comes to an evolving China-US strategic relationship that is deeply interdependent with potential conflicts of interest," Liu Yuanchun said.

Even though bilateral disputes are likely to moderate temporarily, China still needs new solutions and measures to firmly stick to its development path centered on reform and opening-up, said Liu.