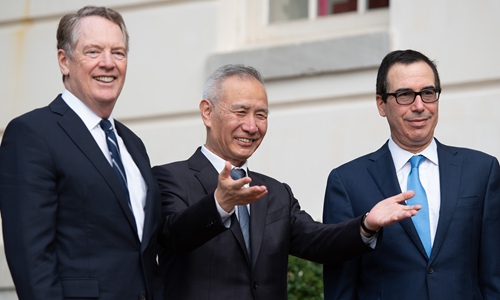 As Chinese Vice Premier Liu He on Monday boarded a plane to Washington to sign a phase one trade agreement, the 14-hour flight marked his seventh trans-Pacific trip, about 145,000 kilometers, or nearly 200 hours, since the US launched the trade war against China nearly two years ago.

But this trip should be considerably easier for Liu as he should just be signing an interim agreement widely hailed by global markets and highly expected to boost growth in both countries rather than engaging in any more tough negotiations with tremendous global implications, Chinese analysts noted on Monday.

After arriving in Washington, Liu will be joined by other senior Chinese officials and attend a ceremony at the White House on Wednesday morning (US time) where the agreement will be signed, according to Chinese and US officials. The text will be released immediately after the signing ceremony.

"The deal is basically 99.9 percent done and the rest is for both sides to put their signatures on," Huo Jianguo, vice chairman of the China Society for World Trade Organization Studies in Beijing, told the Global Times on Monday.

As Liu and his team fly to Washington, the world waits anxiously to see what's in the agreement and for potential signs of where the trade relationship between the world's two largest economies is headed.

So far much attention has been focused on how many products, particularly agricultural goods, China will buy from the US as part of the deal.

This focus comes as no surprise as reportedly some US businesses and farmers have been hit hard by the trade war.

The US-launched trade war against China has cost US businesses $46 billion since February 2018, Reuters has reported.

While US officials have floated specific numbers for China's purchases of US goods, Chinese officials have remained largely silent and maintained that imports of US products must be based on market demand in China.

However, there is much more to expect from the phase one deal than goods purchases, according to Wang Jun, deputy director of the department of information at the China Center for International Economic Exchanges in Beijing.

"The agreement is said to be dozens of pages long and covers a wide range of areas that are at the center of the trade war," said Wang.

Chinese officials announced on December 13 that the phase one agreement would include nine chapters, such as intellectual property rights, technology transfer and a review mechanism.

"More than just the content, the signing of the phase one deal sends a clear signal for the world that China and the US are willing to and can address their dispute despite great difficulties," Wang said.

"That is substantial progress for both countries and a victory for their economies, as well as the global economy."

In China, phase one deal could boost GDP growth to 6 percent in 2020 as opposed to an earlier forecast of 5.8 percent, according to the IMF.

In the US, Treasury Secretary Steven Mnuchin on Sunday cited the phase one deal as a factor that would contribute to a 2.5 percent growth rate he expects for the US economy in 2020.

All parties should manage their expectations of the agreement as more work needs to be done and the path ahead for both countries could be even bumpier, analysts said.

"Even after the [phase one] deal is signed, the most important part is not over. Both sides must implement the agreement," Song Guoyou, director of the Fudan University's center for economic diplomacy in Shanghai, told the Global Times on Monday.

China must be prepared for "potential changes to the deal in the implementation phase," Song said.

He pointed out that the US has shown great unreliability previously and "we cannot rule out that potential new differences will emerge during the implementation process."

This uncertainty and other outstanding thorny issues have lowered expectations for an early start to phase two negotiations, which many Chinese analysts say might not start immediately after the signing of the phase one deal.

"As we often say in China, the hard bone is still left to be chewed," Wang said.

"These touch on China's core development interests and China will not give ground on such issues," he said.

Just as this is unlikely to be the last trip for the Chinese vice premier, both sides should continue down the path paved by the phase one deal to address their considerable remaining disputes, the analysts said.