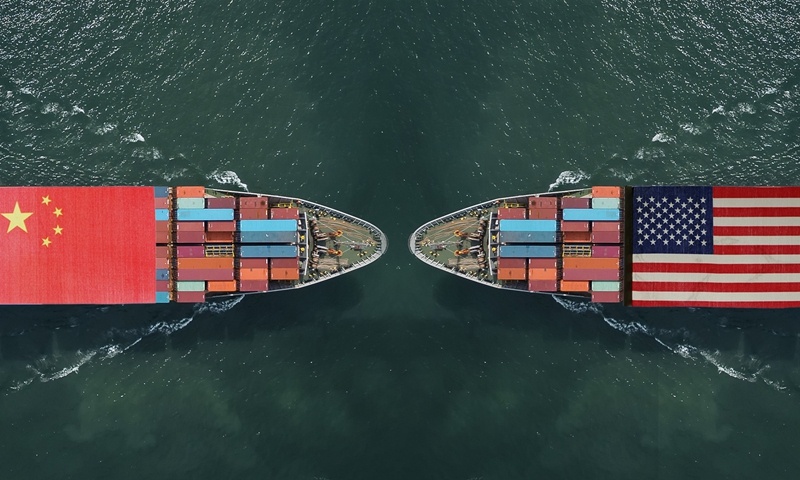 Trade between China and the US continued an upward trend in the past four months, official data showed, highlighting inseparable economic relations between the two countries, although a political chill still exists.

In the first four months of the year, China’s trade with the US rose 50.3 percent year-on-year to 1.44 trillion yuan ($222.8 billion), making the US its third largest trading partner after the Association of Southeast Asian Nations (ASEAN) and EU economies, according to data from the General Administration of Customs on Friday.

China’s exports to the US rose 49.3 percent while imports gained 53.3 percent, and the trade surplus with the US was 653.89 billion yuan, an increase of 47 percent.

Although growth slowed a little bit compared to the two countries' trade rise in the first three months of this year, it is still “under expectation” in the eyes of several Chinese economists, who stressed that it shows that China is still in a stable position to implement the China-US phase one trade deal.

The large increase in imports and exports between China and the US shows that both sides have demand, Tian Yun, vice director of the Beijing Economic Operation Association, told the Global Times, adding that China is implementing the China-US phase one trade deal, but China will increase demand accordingly, instead of blindly expanding imports to the US.

He said China-US relations will be in a state of “political chill and economic heat” this year, and the balance of trade between China and the US requires the US to liberalize rather than restrict exports to China.

The growing surplus shows that the reason cited by the former Trump administration to collect tariffs from China is “groundless,” Gao Lingyun, a trade expert at the Chinese Academy of Social Sciences in Beijing, who closely follows China-US trade issues, told the Global Times on Friday.

He said the widening data is in contrast with US ambitions to reduce the gap — one of the key motivations for former US president Donald Trump to launch the trade war with China.

Currently, most of the tariffs remain in place under the new Biden administration.

The reason why there is still a big jump for China’s exports to the US is the demand on exports of anti-epidemic materials, and growing imports is due to the fact that China is in progress of completing the China-US phase one trade deal, and rising prices brought by depreciation of the dollar is also one of the pushes for growing imports, Gao added.

US Trade Representative Katherine Tai said on Wednesday that she expects to engage "in the near term" with Chinese officials to assess the implementation of the China-US phase one trade deal, and the outcome will affect how the Biden administration deals with punitive tariffs imposed on Chinese goods, Reuters reported.

As the US government has expressed an expectation of holding a dialogue with leading Chinese trade officials for a review of the phase one trade deal — the first time since US President Joe Biden took the White House — Chinese experts urged the US to remove at least part of the punitive tariffs imposed on Chinese products to show sincerity for the trade deal's smooth implementation.

China-US trade spiraled up by a striking 61.3 percent in yuan terms in the first quarter of this year to reach 1.08 trillion yuan. This growth outpaced all of China's other major trading partners including Japan, the EU, and ASEAN economies.