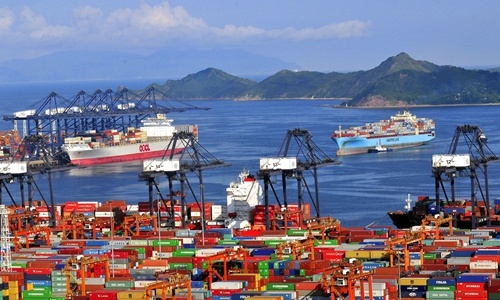 China's trade with the US rose by a staggering 81.3 percent in January and February in US dollar terms, data from the National Bureau of Statistics showed on Sunday.

The high growth is a result of burgeoning demands from the US followingthe country's economic recovery and stimulus policies, one economist said, who predicted that China's exports to the US could surge by around 20 percent in 2021, should the Biden administration not take action to undermine such a trend.

According to customs data, China-US trade rose 81.3 percent year-on-year to $109.8 billion in the first two months of this year, the highest growth among all regions including the EU and ASEAN. China's exports to the US rose 87.3 percent during the period, the second highest just below New Zealand, whose imports from China rose 89.2 percent.

Tian Yun, vice director of the Beijing Economic Operation Association and former economist at the state economic planning agency, said that the US market actually provided the strongest momentum for growth for China's export market in 2020, and now the growth trend is more visible in 2021.

"This is beyond the expectations of many economists, given the two countries' lingering tensions, and the fact that the Biden administration has notyet done anything to correct the Trump administration's trade crackdown policies targeting China," he told the Global Times on Sunday.

According to Tian, the rising trend was mostly a result of surging demands in the US, as the US economy recovered and government stimulus bills were approved, but it was also due to the completeness of China's industry chains and China's pandemic control success, which letsthe world seethat made-in-China goods are safe.

"As long as the Biden administration does not make the current trade policies tougher for China, China's exports to the US might reacha historical record this year," he said.

But he said that the current trade structure, with the US being China's third largest trading partner behind EU and Association of Southeast Asian Nations(ASEAN), would not change in the short term. In the first two months of this year, China's trade with ASEAN members rose 41.9 percent to $120.5 billion, while trade with EU rose 49.6 percent rose $119.6 billion.