China very likely to be Apple’s car production base: analysts 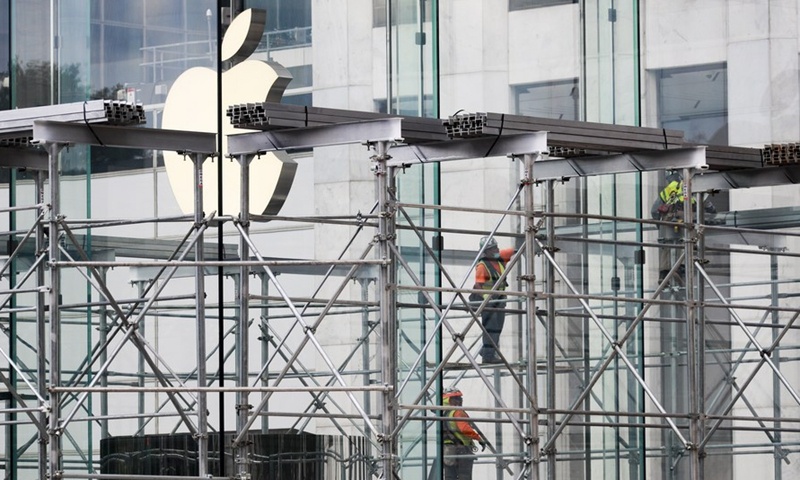 Workers remove the blocks around an Apple store on Fifth Avenue during the Phase one reopening in New York, the United States, June 12, 2020. (Photo:Xinhua)

If a reported ambitious electric car plan by Apple is true, which is highly possible, the company is very likely to put its production base in China, whether it chooses the original equipment manufacturer (OEM) model like the iPhones that are manufactured by Foxconn, or sets up its own factory like Tesla, as China has the most integrated industry chain and the world's largest new-energy vehicle (NEV) market, some industry analysts said on Wednesday.

With Apple's vast customer base in China and the company's rich cash reserves, Apple Car's possible emergence in the NEV sector is also likely to pose a threat to China's NEV new powers such as NIO and Xpeng, they said.

Citing supply-chain sources, United Daily News, a media outlet on Taiwan Island, said that "Apple is expected to release the Apple Car in September next year, and the prototypes are already being tested in California."

"Considering Apple's rich cash reserves, as well as its vast user base, Apple is very likely to expand its business scope to the NEV sector to consolidate its leading position," Zhang Xiang, an auto industry analyst, told the Global Times on Wednesday.

From iOS devices including the iPhone to computer devices such as the Mac Book series, Apple is famous for its industrial design, and many of its products are designed in the US and manufactured in China.

Given this situation, Apple might choose the OEM model for its cars as it has already had rich experience in cooperating with local supply chains in China, Zhang said.

Feng Shiming, another independent car analyst, told the Global Times that setting up a new factory is also a choice for Apple as resource integration will be the trend for NEV producers such as Tesla, which has built a Gigafactory in Shanghai.

However, no matter which method Apple picks, China, with its huge market potential and highly integrated industry chain in the vehicle sector, is a very likely choice for Apple's production base, experts said.

According to the Chinese government website, China's NEV sales in 2019 stood at 120,000, making it the No.1 market in the world.

"First, China has proven that it has the capacity to ensure production activities amid a global emergency such as the COVID-19 pandemic; second, China is almost the only country that has both a highly integrated auto industry chain and vast market with huge potential," Feng said.

China has mature industry chains in the electric motor and battery sectors, as well as advanced companies in terms of artificial intelligence and autonomous driving, which makes China an attractive destination for NEV makers, Zhang added.

As of press time, Apple had not replied to the Global Times' request for comment.

Following the report about Apple Car, potential rivals' shares slumped. On Tuesday, shares of US-listed NIO were down as much as 2.8 percent, while other two major Chinese NEV makers - Li Auto Inc and Xpeng - saw decreases of as much as more than 4 percent.

If Apple really enters this sector, it could pose a severe threat to China's NEV new powers, as Apple has a good customer reputation and a vast user base in China, said Feng, adding that if "Tesla is a shark, then Apple Car would be an alligator."

"Tesla has cutting-edge technologies, and Apple has a good reputation among Chinese customers. For the Chinese NEV new powers, enhancing the development of their own new technologies and emphasizing the ultimate customer experience would be ways to keep their positions in the industry," Feng suggested.