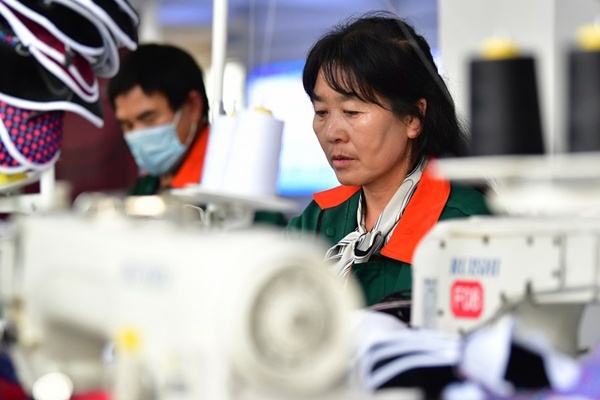 As enterprises continue to face challenges brought by the COVID-19 pandemic, China pledged to adopt further measures that would directly benefit businesses, in a bid to enhance the foundation of economic recovery and growth.

Earlier this week, a host of steps were adopted at the State Council's executive meeting to support the real economy and help market entities through difficulties.

By the end of 2019, China had 123 million market entities including nearly 38.6 million enterprises and 82.6 million individual business owners. "Their prosperity contributes to creating more jobs, pushing technological progress and releasing the growth momentum," said Liu Lifeng, a researcher with the Chinese Academy of Macroeconomic Research.

In order to help businesses overcome hardships, China has been pushing for tax and fee cuts for years. Since the epidemic outbreak, the country has implemented a slew of measures, such as reducing value-added tax for small-scale taxpayers, deferring their payment of corporate income taxes, lowering employers' contributions to social security schemes, and cutting electricity and gas rates for enterprises.

By early August, nearly 300 billion yuan (about 43.41 billion U.S. dollars) from the 2 trillion yuan worth of newly increased fiscal funds have been used to support tax and fee cuts.

The cash crunch has been the biggest problem for companies. According to a survey by the China Association of Small and Medium Enterprises, over 60 percent of firms polled reported liquidity issues, and only 10 percent said their funds could sustain survival for more than half a year.

In response, financial institutions have notably deepened their support for the real economy, especially for micro, small and medium-sized businesses. For example, the re-lending and the re-discount quota have been utilized to grant loans at concessional rates and support the issuance of credit-backed loans.

In the first seven months, more than 870 billion yuan in financial burdens were exempted for market entities thanks to the government's supportive policies.

Liquidity will be kept at an adequate rate, without resorting to massive stimulus. Instead, the direct, structural monetary policy tools will be better leveraged to ensure that the funds flow to where they are most needed and are primarily channeled to the real economy, especially to smaller firms, according to the State Council's executive meeting held earlier this week.

Many market entities are benefiting from the targeted relief policies. Tianjin Golden Wheel Bicycle Group, a private firm mainly engaged in foreign trade, once planned to shut down its overseas factories during the epidemic.

The efforts have paid off. In the first half of this year, the company exported 650,000 bicycles and 60,000 electric vehicles. Its production and operation have returned to the level of the same period last year, and overseas factories have received new orders.

Meanwhile, the country has further improved the business environment to serve market entities better, including more streamlined and efficient approval procedures for construction projects and their financing. Approval processes and conditions for enterprises have been made easier, providing an optimized business environment for foreign trade and investment.

In Shanghai, the Jiading District recently launched a streamlined service system for the approval of industrial projects. The service platform that connects 25 major approval links has further increased the efficiency of the entire process. The procedures that once took 15 working days could now be completed in less than two days.

Data from the China Association of Small and Medium Enterprises showed that the macroeconomic sentiment index, which gauges confidence of enterprises, went up 4 points in the second quarter, and the comprehensive operating index was 4.5 points higher than the first quarter.

It is pertinent to make macro policies more targeted and effective, and create a more favorable environment to help market entities survive and thrive in the second half of the year, said Yang Ruilong, president of the China Macroeconomy Forum. It would help achieve this year's targets for economic and social development, Yang added.